I’ve been reading since I was three years old and I can’t remember a time when diversity wasn’t an issue in children’s literature. Week after week, I’d peruse the Scholastic book orders searching for brown faces. Other than Michael Jackson biographies or the occasional Dynamite magazine cover featuring Kim Fields or the cast of The Cosby Show, the pickings were slim. It didn’t keep me from being a voracious reader but I have to wonder how I internalized the lack of representation and if it’s still affecting me today.

I’ve written about the lack of diversity in young adult covers and the negative message that sends. I’ve raged about recent studies that demonstrate how books are utterly failing to represent their readers  both in content and authorship. I’ve face-palmed myself nearly to death over authors being asked to “straight-wash” LGBTQ characters. It’s enough to drive you insane.

I don’t know what it’s like anywhere else but in the United States, race, ethnicity, and sexual orientation permeate everything. Our collective fixation is almost pathological. We obsess over those issues yet when it comes time to have meaningful discussion about them we either run and hide or throw out knee-jerk responses or platitudes of the “gays are an abomination” or “we have a black President so racism is dead” variety.  We know we need to do better yet we’re so afraid of the work it takes to improve that hardly any progress is made.

Feeling so much rage, anxiety, and frustration about this is effing exhausting. Some days I just want to quit the planet. But I can’t stop thinking or talking about it. Not just because I’m a writer and a black person but because this crap is wrong and is endemic of just how far out of whack society is in general and the publishing industry in particular. 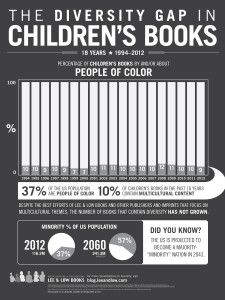 See how ridiculously crazypants that argument is? If we’re not buying anything, it’s that crappy rationalization.

It’s annoying on so many levels. If I write a story featuring white characters, I feel like I’m actually doing my bit for diversity because that’s not representative of my native culture. But because white folks are so over-represented, it’s like I’m contributing to the problem. If I write multicultural characters who aren’t struggling with some aspect of their ethnicity or gay characters who aren’t harassed about their sexuality then it’s not believable. If I make no mention of the characters’ features at all it’s problematic because supposedly readers’ brains will explode if they don’t know what the characters look like.  *strangled scream*

I wouldn’t have to consider any of this nonsense if the stories being presented were more diverse across the board. Industry gate-keepers (publishers, editors, booksellers, librarians, bloggers, et al) must push past their comfort zones and make meaningful efforts to reflect the real world in the books they publish, buy, sell, and promote. Readers must continue to express their displeasure with being patronizingly told what their wants and needs are.

Most importantly, writers must continue to create the stories that move them. “Write what you know” is a myth. We’re not afraid to write about global catastrophes, aliens, or shape-shifting werebeasts, so why should writing outside our cultural or sexual experiences scare us? If we research well, write authentically and honestly, and know that we’ll make mistakes, it will be fine.

As writers, we’re constantly told not to chase trends. So why would anyone purposely configure their stories to fit into the ridiculously narrow molds of a publishing industry that requires everything be filtered through a straight, all-white lens?

Not gonna. And you shouldn’t either.

We control the story. We can change how it ends. We have that power. We just need to claim it.

— Adrianne Russell writes stories about boys and girls and the boys and girls that love them. When she’s not crafting plans for the zombie apocalypse, she’s daydreaming about being a professional baked goods tester. You can find her blogging at The Writers Republic and oversharing on Twitters at @writersrepublic.