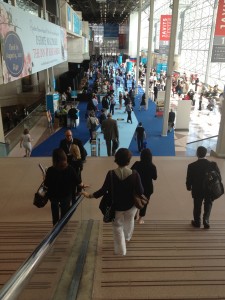 Swenson Book Development, LLC was in the thick of publishing madness two weeks ago  – two members of our team, myself and Jill Swenson, checked out the trade floor and events at Book Expo America.  BEA is the place for movers and shakers of the North American publishing industry. From event interviews of famous musicians-come-authors to Harlequin Romance shilling for their latest salacious-covered paperback, from bustling New York convention centers to the intensity of a one-on-one in a publisher’s booth, Swenson Book Development LLC saw it all in an absolute blitzkrieg of a single day at the epicenter of the American publishing world.

Jill Swenson and I started our day on an early morning bus from Cornell campus. It appeared many of the passengers were also attending BEA – drafts spread out over numerous laps, red pens at the ready.

After a stint eavesdropping, watching, and whispering, “Is that him? I think it is!” we craned over the bus aisle to introduce ourselves to J. Robert Lennon, an Ithacan author and musician. Lennon was at the convention at behest of his publisher, Grey Wolf Press, and would be signing novels and shaking hands.

As the five-hour bus ride from Ithaca to the Big Apple stop-and-goed through the traffic in Manhattan, Lennon and SBD, LLC decided to skedaddle through the heart of NYC together towards the convention center.  Jill and I dodged fanny packs and hot dog trucks at a record pace in Times Square – admittedly, we had an ulterior motive. 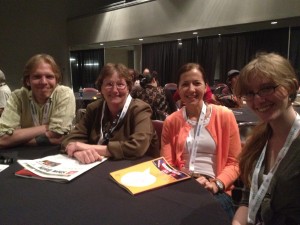 Neil Young has a new book coming out, and to promote it gave an interview moderated by the indomitable Patti Smith. Jill and I were in such a rush to get in line that we hardly had a second to marvel at the magnitude of the Javits center. All we did was collect Ashley Grill and Cathryn Prince, two clients of SBD, LLC who were meeting us in the hubbub, and book it to the end of the line that snaked through the center.

Saying this line was long is the absolute opposite of a hyperbole. If every member of this line bought a book, it would be on the New York Times bestseller list.  Luckily, Book Expo America anticipated the scale of this interview and scheduled it in a room large enough to contain all of us gibbering, blogging fans.

Patti Smith was the perfect moderator for Neil Young – beyond their history and ties to each other, Smith’s liveliness was a wonderful foil to Young.  Despite some microphone problems at the get-go, Patti and Neil discussed everything from his writing process (a struggle) to his childhood nickname, (“Windy”) to Young’s latest album.

After the interview, Jill gathered up Andrew Kessler, Ashley Grill, and Cathryn Prince and ushered us to an entirely cream-colored restaurant for lunch. We tried to talk business, but the moment that chop salads and heavenly chicken clubs arrived there was nothing but the sound of chomping for several minutes.

Sated and happy, Jill and I bid adieu to Kessler and Prince and headed back to the intensity of the trade floor.

Now, if you’ve never been to a publishing convention it is quite a doozy. All of the publishers you’ve heard of – Norton, Penguin, Wiley – are there, as well as hundreds of lesser-known houses.  The booths, staffed with interns and swag, stretch further than the eye can see. Well-dressed women in pant suits try to hand free copies of the latest book to you, paperbacks stamped with “UNCORRECTED PROOF: NOT FOR SALE.”  Everyone carries totebags, smiling and glancing at your nametag to see where you fit into the scheme of things.

Some of the publishers – the large ones with equally large budgets – have fun little extras to lure you to their booths. You can see Swenson Book Development trapped in a bubble here. We also nibbled on cupcakes and graciously declined having our photo taken with Harlequin Romance novelists against the backdrop of a blown-up cover.

But mostly, we schmoozed. 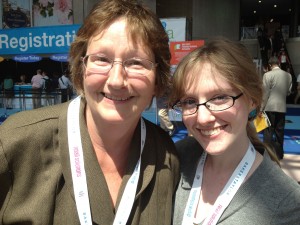 Jill Swenson had an itinerary to check up on editors and follow up with leads and emails in person, but in between our set schedule we shook hands and looked at booths. Some of the booths and their free books you’ll be hearing about more – look for reviews of A Queer and Pleasant Danger, Does This Church Make Me Look Fat, American Decameron, and Familiar coming soon.

Our hours on the trade floor were exciting, fruitful, and tiring.

By the time Jill and I made it back on the long bus to Cornell, our dogs were barking and we were looking forward to the long ride home.

This was Swenson Book Development’s second year at BEA, and we’re looking forward to sinking our teeth into the next one. We found some exciting directions to go in, we saw some musical and artistic greats, and, just in case you missed it, we got our picture taken in a giant bubble. SBD, LLC was ecstatic to be in the thick of things at the heart of NYC, but in the end? It was great to head home and get back to work with the memories of the thrill to inspire us.

One thought on “A Day at BEA: Swenson Book Development does Book Expo America”