Though going to a brick-and-mortar bookstore has been something many of us missed dearly this past year, slowly they are reopening in most parts of the country. While it may be safe to head inside your local indie bookstore, heading to the romance section feels like an activity that needs to be done in a baseball hat, sunglasses, and perhaps a fake mustache. I won’t be surprised to see you in a disguise searching the bookshelves because when I finally reconnected with friends and family, of course, I had to ask what shows people watched for entertainment during the pandemic. Bridgerton. 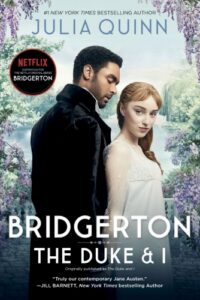 According to Entertainment Weekly, 82 million households viewed the show within the first 28 days of it premiering on Netflix in 2020. The Regency romance based off of Julia Quinn’s nine-novel series became an instant hit. With the infamous Bridgerton siblings searching for love in 1813 London, and with eight siblings to follow, it’s no wonder season 2 is in the works and seasons 3 and 4 are in the process of being greenlit as well.

For the “bodice-ripper” romance series, popularity in the show has led to a major increase in book sales as well. One month after the show premiered, The Duke and I jumped to the New York Times’ bestseller list twenty years after it was initially published. Americans weren’t the only ones to fall back in love with Quinn’s books; the UK, Australia, Brazil, and Germany had The Duke and I on their bestseller list for months after the show premiered. According to her website, Quinn’s books are on track to be translated into 39 languages as of April 2021.

A book series translated to television or movies is nothing new. The truly extraordinary factor in Bridgerton’s success is the fact that it’s based on a historical romance series.

When most people think of historical romances either Jane Austen’s Pride and Prejudice or Sense and Sensibility come to mind, or the more modern and less chaste versions of paperbacks in the drugstore with a swooning heiress and dashing duke embracing on the cover. Quinn’s world attracted duo Shonda Rhimes and Betsy Beers right away. Rhimes even admitted in a Vanity Fair interview she was “obsessed with Bridgerton from the time [she] read the books and forced [Beers] to read all of them.” In that same interview, Beers explained part of the allure of this particular historical romance was the “incredibly modern aspects. . . It’s wish fulfillment, but at the same time it’s a woman finding out who she really is.” 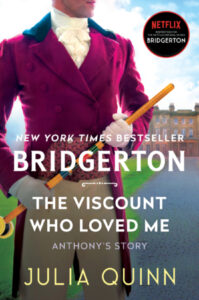 Paperback romances get a bad rap in the literary world, sometimes even earning an eye-roll. They’re seen as quick, cheap novels mainly for women who want to read steamy scenes with well-muscled men. The stigma attached to said novels is reason enough to invest in a trench coat and hat. Some may question if there can be any modern, feminist themes in such a repressed setting. Though the clothing may be muslin gowns instead of jeans and t-shirts, many issues women faced in the Regency era are still relevant today. Writers of the genre can implement freedom-seeking heroines in early 19th-century England, and they provide plenty of multi-dimensional attitudes for everyone who crosses their path.

Novels like Quinn’s series provide an excellent escape from the at times overwhelming modern world. That idea is gaining more traction, especially after the world shut down and escape became essential to mental well-being. Perhaps in the future more romance series will be translated to the screen, and browsing the romance section of a book store won’t be a cloak-and-dagger activity.

*Samantha Kolb interned for Swenson Book Development in 2015 and 2016. She returns this summer, ever an avid reader, as a guest blogger before she assumes her new position with the Appleton Group, a financial investment firm here in the Fox Valley.