It is a privilege to serve on the board of the Fox Cities Book Festival and it is with great excitement I can share the news about the 2018 selection for the Fox Cities Reads.

Each year one book brings together the communities of the Fox Cities. This year that one book is Salt to the Sea by Ruta Sepetys. 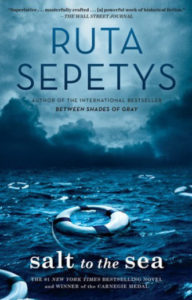 In 1945, World War II draws to a close in East Prussia and thousands of refugees are on a desperate trek toward freedom, almost all of them with something to hide. Among them are Joana, Emilia, and Florian, whose paths converge en route to the ship that promises salvation, the Wilhelm Gustloff. Forced by circumstance to unite, the three find their strength, courage, and trust in each other tested with each step closer toward safety. Just when it seems freedom is within their grasp, tragedy strikes. Not country, nor culture, nor status matter as all ten thousand people aboard must fight for the same thing: survival.

In recent months, the subject of refugees and immigrants have become part of our community conversations and this historical novel helps us imagine displacement by war and cultivates empathy for those who may be from a different country or culture. 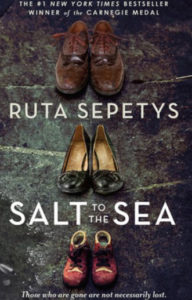 Ruta Sepetys shares her love of history and family with her audiences and the Fox Cities will have four opportunities to hear her speak.  The public is invited to Kaukauna High School on April 12 at 12:45p for a presentation.  There will be an evening presentation at Appleton North High School on Thursday, April 12 at 6:30p.  The Reader’s Loft will sell copies and host a book signing after her public presentation on Thursday evening.  She will also have a public presentation at Appleton Public Library on Friday, April 13 at 10:00a, and  Thomas Lyons Fine Books will sell copies of her book and host a book signing. Ruta Sepetys will also meet with Neenah High School students on April 13 at 2:00p though this session is not open to the public.

Here’s a book trailer to give you a sense of the story and the gift of storytelling Ruta has to share with readers. 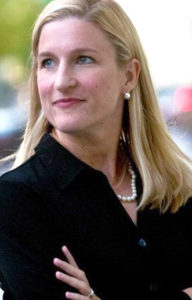 Ruta Sepetys (Rūta Šepetys) is considered a “crossover” novelist as her books are read by both students and adults worldwide. Her latest novel, Salt to the Sea, is a #1 New York Times bestseller and winner of the Carnegie Medal. Her books have won or been shortlisted for over forty book prizes, are included on over twenty state reading lists, and are currently in development for film and television. She is intensely proud to be Lithuanian, even if that means she has a name no one can pronounce. Ruta lives in a treehouse in the hills of Tennessee.

If you’re in the Fox Cities on April 12 and 13, don’t miss Ruta Sepetys’ visit. Readers are encouraged to pick up a copy of Salt to the Sea and participate in book clubs and discussion group sessions organized at the Kimberly-Little Chute, Kaukauna, Neenah, Menasha and Appleton libraries. I hope you’ll join me in welcoming Ruta Sepetys to the Fox Cities.

What question would you ask her?