The Fox Cities Book Festival is April 20-26 in Appleton, Neenah, Menasha, Kaukauna, Little Chute, and Kimberly, Wisconsin. This book festival aims to connect writers with their readers and readers with those who write the books they read. During my first week of residency in Wisconsin, I plan to partake in this celebration of books. 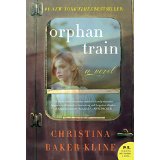 Christina Baker Kline’s Orphan Train is the 2015 Fox Cities Reads selection. Interesting that my Brooktondale book club had read it recently so I feel as though I can participate in the community conversations about the book. Kline will appear at a half dozen public events scheduled between Monday April 20th and Sunday the 26th, 2015.

Between 1854 and 1929, more than 200,000 orphaned, abandoned, and homeless children – many of them first-generation immigrants from Italy, Ireland, and Poland– were transported by train from coastal cities of the eastern U.S. to the Midwest for “adoption” (often indentured servitude). Kline’s historical novel creates interesting public conversations around history, family, ethnicity, and adoption.

Kline is one of many authors – national, regional, and local – who represent their work directly to readers at the Fox Cities Book Festival. Fiction and nonfiction, Young Adult and humor, self-help and poetry. Even an asphalt cowboy poet, Doc Mehl.  On Friday evening at 6:45 pm Doc performs his Westclectic Music & Poetry at the OuterEdge Stage. 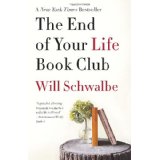 What I look forward to most is a Writing Craft Talk with Will Schwalbe at the Atlas Coffee Mill in Appleton on Saturday, April 25, at 9 a.m. Will Schwalbe, author of The End of Your Life Book Club (Knopf, 2012), has been a friend to me on Twitter with wonderful book recommendations since 2013. Good writers read good writing. While most of the events focus on reading and readers, there are a variety of program offerings – including this one – for the vibrant community of Wisconsin writers.

Started in 2010 by Wisconsin’s first Poet Laureate, Ellen Kort, the Fox Cities Book Festival is a testament to the power of books and the passion for reading.

Book festivals around the country connect writers with readers. This past weekend, there was the Los Angeles Times Festival of Books, the largest in the country. The end of May at the Jacob Javits Center is BookCon (which follows the largest trade show for booksellers, Book Expo America). In many cities and most states you will find book festivals increasingly popular and well-attended. What is your favorite book festival?