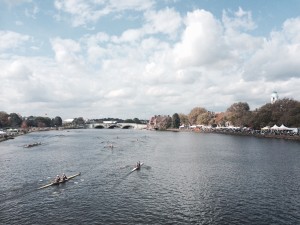 Regatta on the Charles River

For many recent college graduates, or really anyone with big aspirations, New York City is the destination – and was the destination for most of my friends graduating from college this past May. New York also has the reputation of being the book publishing epicenter of the East Coast. Searching for jobs online on Publishers Marketplace or MediaBistro, many entry-level jobs posted are based in New York.

“You want to work in publishing? Why not New York?” people asked me. I couldn’t quite say New York, everyone’s dream city, felt cold and uninviting, while Boston beckoned me; exciting yet approachable.

It’s been about a month now since I made a quick and somewhat spontaneous move from the Ithaca area to New York’s smaller, cleaner, preppier counterpart. Since I arrived, I’ve been working part-time for Swenson Book Development and part-time as a sales associate for The World’s Only Curious George Store, a quaint children’s book and toy store in the bustling heart of Harvard Square in Cambridge.

Working at a bookstore is one exciting challenge after another. A customer will come in with an incredibly specific request, like the perfect book for a precocious 6-year-old who loves mermaids but hates princesses. The next will be searching for a gift for a child they barely know and will leave it to me to find a book with near-universal appeal. All the while, I’m becoming familiar with what books people are drawn to and introducing people to the books I love – and to the talented authors and illustrators they may not otherwise know. 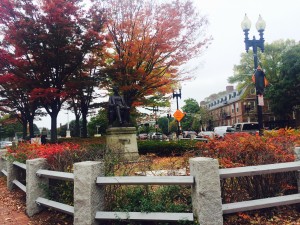 If working at the store 20 hours a week isn’t enough to fulfill my literary fix, there are independent bookstores like Raven Used Books and the Harvard Bookstore within walking distance. Raven has the quintessential hole-in-the-wall bookstore feel, with a wide selection of used and rare books. And Boston Magazine named Harvard Bookstore Boston’s best bookstore of 2014, stating, “At a time when bookstores need to be much more than bookstores to survive and thrive, no other local shop offers so many reasons to turn into a bona fide bookworm.” In September alone, the store hosted events with Matthew Thomas, Rainbow Rowell and Jason Segel, among others. They bring in authors to please every type of reader: actor and comedian Amy Poehler will speak in October and former President Jimmy Carter in November.

Venturing out of the Cambridge bubble, you’ll find Trident Booksellers & Cafe and another location of Raven Used Books on Newbury Street as well as the Brookline Booksmith, which has been open for over 50 years, has a great monthly newsletter and, like the Harvard Bookstore, an impressive calendar of events.

Aside from being a literary haven for readers, the Boston area is home to several publishers. Along with publishing giants Houghton Mifflin Harcourt and the Hachette Book Group are several smaller boutique publishing houses: Charlesbridge Publishing and Candlewick Press publishes beautiful children’s books, many of which line the shelves of the Curious George Store (local supporting local!). For fiction and non-fiction: Beacon Press as well as Shambhala Publications, which acquired Ithaca’s Snow Lion Publications as an imprint. 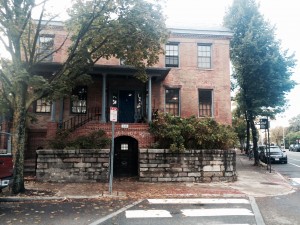 The neighborhood of my apartment in Cambridge has the feel of downtown Ithaca, with quaint coffee shops and dive bars and a strong, constant sense that you’re in the midst of eccentric, incredibly smart people. With Harvard and MIT campuses within walking distance, there’s access to readings, lectures and classes with some of the best minds in their respective fields.

Coming up on October 25 is the Boston Book Festival, Boston’s FREE street festival for all things books, held every October in Copley Square. With an array of authors and other presenters speaking on various literary topics as well as interactive seminars, live music and street exhibits by booksellers, literary magazines and art organizations, it’s a one-day culmination of the many interactive facets of the Boston book world. I will be attending the event, with schedule and several book-ready canvas bags in hand, to listen to some of my favorite authors and hear new, inspiring voices in the industry.

And so I return to the question, “Why not New York?” After spending a month exploring this city, learning as a reader and a bookseller and connecting with professionals in the book publishing field, I can respond with confidence: “Why not Boston?”.