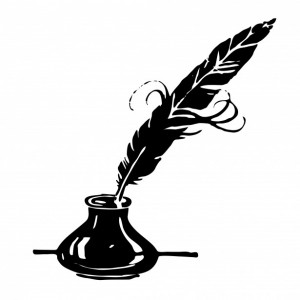 French for ‘pen name,’ a nom de plume is a fictitious name under which an author publishes. Mark Twain was the nom de plume of Samuel Clemens. George Eliot sounded more serious than Mary Ann Evans.  Theodore Geisel was known as Dr. Seuss. In 1899 William Sydney Porter took the name O. Henry so editors might never know the stories were submitted by a convicted felon. Eric Blair become George Orwell as a shield from critics and cranks. 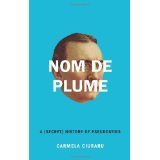 A fascinating collection of stories about authors who took pen names can be found in Carmela Ciuaru’s Nom de Plume: A (Secret) History of Pseudonyms (Harper, 2011). Why some of the most well-known writers sought privacy and anonymity tells us as much about the times as the temperament of the artist.  Patricia Highsmith penned her lesbian novel as Claire Morgan in the 1950s. Vampire novelist Anne Rice wrote erotica as A. N. Roquelaure in the 80s’ to avoid scandalizing her father, but her ruse didn’t last long. Sylvia Plath first published The Bell Jar under the pen name Victoria Lucas because she feared it would offend her mother.

The reasons for taking a nom de plume are as varied as the writers who do it. And the times have changed.

J.D. Robb, Nora Roberts, Jill March, and Sarah Hardesty are four pseudonyms used by author Eleanor Marie Robertson. She uses a different name for writing romance, suspense, fantasy, and for titles she publishes in the U.K. For prolific genre writers, it’s one way to produce more than one book a year and not saturate the market. Stephen King wrote seven books as Richard Bachman and kept up the charade for years. He described it as a gimmick to limber his mind as a writer. J.K. Rowling published her first crime novel as Robert Galbraith. Motives are no secret in the publishing industry. Trade mass-market and genre fiction are different markets, different price points, and reach different demographics and therefore it’s a chance to sell more books.

Anonymity may be a relic of the Victorian age. Privacy is a relic. Thomas Pynchon may be the last American novelist who can insist on living in anonymity. J.D. Salinger is dead. Neither used a nom de plume.  Publishing is about putting yourself out there in public. It’s almost impossible to remain anonymous in the age of transparency.

No headshot? No blog? No interviews? No bookstore readings or speaking gigs? No online presence? Readers engage with authors, not publishers. In order to get published an author has to convince a publisher they are not anonymous. Today the author is the brand and the product is the book. Without the brand of JK Rowling, Robert Galbraith sold 1,500 copies in the UK and 1,800 copies in the U.S. of The Cuckoo’s Calling.

This is not to suggest motives for using a nom de plume are self-interest. An author might use a pseudonym to protect others, especially if the book is memoir. I’m reminded of Dani Shapiro’s essay, “The Me My Child Mustn’t Know,” in which she reflects on writing Slow Motion with no thought she might be some day be a mother and her son would hear the story about her dropping out of college at 20, drugging and drinking, having a destructive affair with a much older married man, only to wake up when her father was killed and mother badly injured in a car crash in her early 30s.

Anonymity may give a writer permission to write with abandon instead of worrying about the consequences. A nom de plume is not a 100% guarantee of anonymity, however. For a debut author, if there is no compelling reason other than ego to use a pen name, don’t.

One successful author who has taken American audiences by storm this past year because of the mystery invoked by her nom de plume is Italian novelist, Elena Ferrante. The media attention to her name is greater, perhaps, than to her literary contributions to fiction.

Writing a series of books about lifelong women friends in a Naples neighborhood, Ferrante is something of a cult sensation. The mystery, the allure of an Italian woman author whose stories garnered critical acclaim is her only marketing.

Italy is no less than America a culture obsessed with image and publicity, yet Ferrante’s pseudonym operates like a witness protection program for the ‘fictional’ affairs and emotionally devastating events which ensue in her plots.  The teller of the story recedes into the reader’s mind for the sale of the tale. The question of Ferrante’s nom de plume is one with a powerful literary function.

The very elusive Elena Ferrante said in rare email interview exchange with the New York Times on December 10, 2014, that once a book is published it doesn’t need its author anymore. It belongs to the readers.

Have you ever considered a nom de plume? Why? What would you write with abandon?

In the pre-dawn hours of February 18, 1942, three American warships zigzagged in convoy along the south coast of Newfoundland. Caught in a raging blizzard, the three ships ran aground on one of the most inhospitable stretches of coastline in the world—less than three miles apart, within eight minutes of each other. The Wilkes freed herself. The Truxton and Pollux could not. Fighting frigid temperatures, wild surf, and a heavy oil slick, a few sailors, through ingenuity and sheer grit, managed to gain shore—only to be stranded under cliffs some 200 feet high. From there, local miners mounted an arduous rescue mission. In Hard Aground, based on END_OF_DOCUMENT_TOKEN_TO_BE_REPLACED

One thought on “Nom de Plume: permission to write with abandon?”