There was no warning for the average writer when their WordPress Twitter widgets went silent on June 11th, 2013. Suddenly, all their posts and retweets disappeared from their website. Their engagement went haywire as tweets no longer seamlessly streamed into sidebars, and footers, and landing pages.

The developers knew what was coming – Twitter was updating their API (Application Programming Interface) from v1 to v1.1. The changes brought by this update would add extra security features ‘authenticated’ by Twitter’s new system. More security, yes, but third-party access would be neutered. All those WP widgets and plugins would send ‘unauthenticated’ requests to Twitter – and your feed would fall silent, trapped in a purgatory of unauthenticated cries for content.  The developers knew – but the average Jill didn’t.

Luckily, Twitter had planned for this occasion – they wanted you to use their official widget makers. Their embedded timelines allow you to create feeds for your website of your twitter feed, of the feed for a hashtag, a favorite collection of Tweeps or a list. It’s wonderful, and it works great.

But back on June 11th, all but the tech-saviest bloggers had no idea why their Widgets suddenly stopped working.

Putting your trust in plugins is a risky business; keeping an eye on social media news through sites like Mashable Social Media or Smashing Magazine can make sure you’re aware of any big changes that are in the works for the platforms you use.

In general, it’s a good idea to use a widget developed by the social media platform itself (first-party plugins/widgets) than one made by an independent developer (third-party plugin).

However, writers, harden your hearts – there’s no such thing as a social media plugin that won’t cause you heartbreak in the long run. 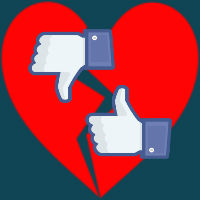 There are a lot of steps to blogging – once you’ve written the darn thing, you have to make sure it reaches the widest audience possible. Automation is your friend.

That’s why when Facebook announced an official plugin for WP, bloggers rejoiced. It would add like and share buttons to your posts. It would automatically post to your timeline. It would add Open Graph protocol automatically, and all your links would look beautiful and clear.

However, how it ended up performing can be summed up by a top review on the plugin page:

It seemed wonderful, but somethings are too good to be true.

How do I create engagement between my website and social media platforms?

With the exception of adding the official Twitter widget to your WP site, you create engagement manually. Post links with copy and paste. Do the tasks of sharing yourself.

Feel free to experiment with first and third-party plugins – but don’t be surprised if one day you wake up to find them gone.