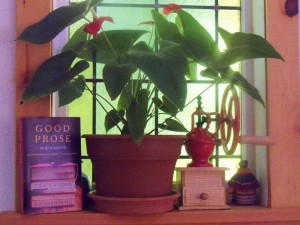 Tracy Kidder and Richard Todd have co-authored Good Prose: The Art of Non-Fiction and opened a window into writing and editing, writer and editor. Author of Strength in What Remains, Mountains Beyond Mountains: The Quest of Dr. Paul Farmer, A Man Who Would Cure the World, Tracy Kidder won the Pulitzer Prize for his 1981 non-fiction narrative, The Soul of a New Machine. Kidder established a relationship with his editor, Richard Todd, at The Atlantic Monthly during the 1970s. Good Prose is as much a story about the 35 year history of a working relationship between Kidder and Todd, as it is an excellent resource for the craft of writing narrative non-fiction.

Chapters Two and Three on narrative and memoir are especially relevant to those working on finding the story and structure. As Kidder and Todd write about literary notions like author’s voice, it is transparent to the reader who narrates each section and you can hear their distinctive perspectives and differences without artifice. The kind of editing one learned in high school or freshmen composition class is merely tinkering. The subtitle, Art of Non-Fiction, implies the artisanry with language these two work. You can’t get very far with an editor who simply pushes things around. Richard Todd is not that kind of editor.

“Editing isn’t just something that happens to you. You have to learn how to be edited,” to quote Kidder on page 136. In publishing today, the acquisition editor who signs an author for a book may not be at that company by the time the book is published and certainly does not have the time to edit the manuscript. I often read book reviews which suggest the failure is the lack of an editor. Writers often resist editing and often the writer prevails simply because a writer is exhausted and committed to his errors, according to Todd. He understands his responsibility as an editor is not as a fixer. He addresses book editors: “You have to admit your confusion, and you have to go back to the author.”

There is so much to recommend about this book for writers, and editors. Here’s a few snippets I hope will entice you to explore the wisdom between the covers of Good Prose. In this short review, some of their editorial suggestions are worth sharinng.

Things Kidder and Todd would happily expunge from language in publication:

“The desire to tell the truth haunts the serious memoirist, and so it should. But there is a step beyond truth. For the writer, the ultimate reward of memoir may be to produce a work in which the facts are preserved but the experience is transformed” (p. 61).

“Writers who need editors have to learn to listen, really listen, to advice that no one wants to hear — that you should jettison heard-earned pages, that you must start again” (p. 156).

“I may like not what I see but what I imagine.You have to envision the potential of a piece of writing, and potential can sometimes be more exciting than reality. Emily Dickinson’s line ‘I dwell in possibility, a fairer house than prose’ is an editor’s motto” (p. 171).