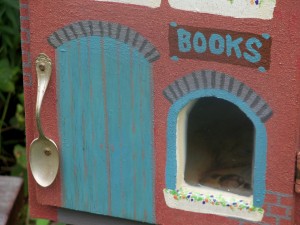 In 2009 Todd Bol built a wooden box, made it look a bit like a schoolhouse, mounted it on a post in his front yard of his home in Hudson, Wisconsin, filled it with books, and stuck a note on the front door to take one, leave one. Bol started this as a tribute to his mother, who was a book lover and school teacher. His partner Rick Brooks in Madison helped to spread the idea of Little Free Libraries. In 2013, all 50 states and 40 nations have registered sites. The original goal was to create 2,150 libraries which would surpass the number Andrew Carnegie built in his lifetime. Today there are almost 6,000 around the world. And the numbers continue to grow.

On a visit to Madison more than 18 months ago, I had the pleasure of discovering one after another of these way stations for word-lovers on walks through neighborhoods. When I returned to Ithaca, I knew the seed of this idea could take root here. I sent off for registration materials. Three Little Free Libraries have since popped up in Tompkins County.

Ellen Bonn is the steward of #4787 at 110 Penny Lane in Commonland in east Ithaca. Teresa Porri is steward of #2086 at 1039 Hanshaw Road in the Cayuga Heights neighborhood where sidewalks are being installed. And between East Shore Drive and Pyramid Mall, Linda Byard is steward of #4873 at 52 Wedgewood Drive in Ithaca. Are there others we don’t yet know about? Rumors have unofficial little free libraries near Hickeys Music, near Myers Point, and next to the building that used to house the Tompkins County Public Library on the corner of Court and Cayuga Streets.

Looking for potential community locations to support a Little Free Library in Ithaca, I came across a fun post by Funky Fresh Ithaca blogger, Amanda Jaros, back in May. She had visited Madison, too, and found herself inspired to bring the idea home. With her husband and son, Amanda created a little free library on the west hill of Ithaca but didn’t have the $35 yet to register and asked readers if they might donate to defray the expense. All summer long Amanda watched her neighbors, dog walkers, bikers, and hikers taking the green path from the end of Helen’s Way. As in Helen Caldicott.  This dead-end for vehicular traffic makes it a green gateway up into Eco-Village. They leave and take, and take and leave books.

This past week I had the pleasure of visiting Amanda at her home and got to see her library built with heart and brought to life in this vibrant green neighborhood.

Pleased to find an ideal steward in an ideal location, I handed over registration to Amanda Jaros to make #4094 official. It’s already on the Little Free Libraries’ locator map.

In the pre-dawn hours of February 18, 1942, three American warships zigzagged in convoy along the south coast of Newfoundland. Caught in a raging blizzard, the three ships ran aground on one of the most inhospitable stretches of coastline in the world—less than three miles apart, within eight minutes of each other. The Wilkes freed herself. The Truxton and Pollux could not. Fighting frigid temperatures, wild surf, and a heavy oil slick, a few sailors, through ingenuity and sheer grit, managed to gain shore—only to be stranded under cliffs some 200 feet high. From there, local miners mounted an arduous rescue mission. In Hard Aground, based on END_OF_DOCUMENT_TOKEN_TO_BE_REPLACED