At some point you will share your work with someone for editing – and that’s where the art of writing gets technologically tricky.

Microsoft Word has a well-documented compatibility issue between versions of the software; Google Docs doesn’t have an easy way to track changes; Pages for Mac doesn’t play nicely with PCs… the list goes on and on.

Luckily, it seems that collaborative writing has become the focus of some reasearch and development and a recent start-up.

Medium isn’t meant for editing – consider it a new way to blog –  but it’s moving in a direction of organic community-based creation that is just waiting to be savored by tech-savy writing groups. Ev Williams, Medium’s midwife, was the man behind Blogger and the cheerleader that brought Twitter to the online world’s attention. What is he accomplishing with his latest project?

Medium (currently in closed Beta) invites users to create a theme and generate or curate content with invited collaborators. 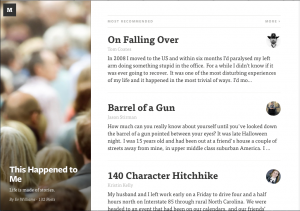 Within your freshly written content, you and your collaborators can leave notes for each other, easily edit the text, and upon publication receive credit where credit is do. Imagine, with your writing friends, piecing together ideas and eradicating typos before publication.

It’s an entirely new way to think about blogging; the solipsistic nature of Twitter and personal sites is intrinsically absent from Medium. Critics say its just another platform – but maybe its ripples will lead to better collaborative writing software in the future.

In the pre-dawn hours of February 18, 1942, three American warships zigzagged in convoy along the south coast of Newfoundland. Caught in a raging blizzard, the three ships ran aground on one of the most inhospitable stretches of coastline in the world—less than three miles apart, within eight minutes of each other. The Wilkes freed herself. The Truxton and Pollux could not. Fighting frigid temperatures, wild surf, and a heavy oil slick, a few sailors, through ingenuity and sheer grit, managed to gain shore—only to be stranded under cliffs some 200 feet high. From there, local miners mounted an arduous rescue mission. In Hard Aground, based on END_OF_DOCUMENT_TOKEN_TO_BE_REPLACED