Austin hosted another Texas Book Festival over a beautifully crisp and sunny fall weekend, October 27-28. Having gone over budget at the vendor tents last year, I resisted temptation this time by heading straight for the capitol to hear authors speak. Not realizing that I would have to stand in line for a security check and then make my way through the bowels of the capitol building, I felt lucky that I was not shut out of my first choice: John Spong, author of A Book on the Making of Lonesome Dove (University of Texas Press, 2012). I confess I have never read the book or watched the mini-series, but I was in the mood for things Texan, and Spong delivered. As someone who doesn’t live and breathe “Lonesome Dove,” I’m apparently in good company. According to Spong, McMurtry regards it as “just a book.” 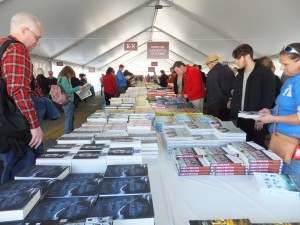 Tempting books for sale under tents

Lines were forming around the rotunda floors when I arrived to wait for a seat in the Senate Chambers to hear William H. Chafe, author of Bill and Hillary: The Politics of the Personal (Farrar, Straus & Giroux, 2012). A history scholar of the women’s and civil rights movements, Chafe, with his white hair and beard, has a very professorial appearance. I cringed when the moderator asked him why he chose such a “heavily trafficked discourse” to write about, and I prayed for deliverance from academic-speak. Fortunately, Chafe’s language was plain and humble as he spoke about the complexity of the Clinton union, as a marriage between two human beings, as a product of their time, and as a political force over three decades. I couldn’t resist asking the author about his marital status (while we were considering the personal as political). And, yes, he is married–48 years to Lorna Waterhouse Chase, a feminist dedicated to providing quality child care for working moms. So, in addition to having the scholarly credentials to write an historical account of the Clintons in politics, he also has the personal credentials to write about long-term marriages. At least in my book he does. And still I think I should have also asked him: Why is your book titled “Bill and Hillary” rather than “Hillary and Bill”? 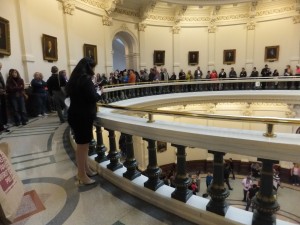 Lines forming in the capitol rotunda

The next morning, I came back to hear H.W. Brands, author of The Man Who Saved the Union: Ulysses Grant in War and Peace (Knopf Double Day, 2012), explain the political anomaly of Grant, dispel myths surrounding him, and ponder the war monger in man. So what are the myths? Contrary to popular opinion, Grant was not a drunkard; he simply couldn’t hold his liquor. “And the distinction is important,” says Brands. Grant was drunk after one drink and falling down after two, but stone sober once he escaped the frat-boy-like officers’ clique to command the union troops. An accidental leader who stumbed upon his own military genius, Grant accepted the presidency at his countrymen’s request; he never aspired to it or sought it out–unlike our candidates today.

Brand is a riveting speaker, and if you’d like to hear him for yourself, you can either enroll in one of his history classes at UT-Austin or you can turn on The History Channel where he makes frequent appearances. 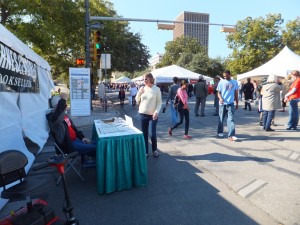 Now that I’ve had my appetite whetted, I’ll have to check out these authors and their books from the public library–in e-form or print–whichever requires less waiting. And maybe next year I’ll feel more flush with cash, enough to buy my own copies for signature.

In the pre-dawn hours of February 18, 1942, three American warships zigzagged in convoy along the south coast of Newfoundland. Caught in a raging blizzard, the three ships ran aground on one of the most inhospitable stretches of coastline in the world—less than three miles apart, within eight minutes of each other. The Wilkes freed herself. The Truxton and Pollux could not. Fighting frigid temperatures, wild surf, and a heavy oil slick, a few sailors, through ingenuity and sheer grit, managed to gain shore—only to be stranded under cliffs some 200 feet high. From there, local miners mounted an arduous rescue mission. In Hard Aground, based on END_OF_DOCUMENT_TOKEN_TO_BE_REPLACED

One thought on “Texas Book Festival 2012”