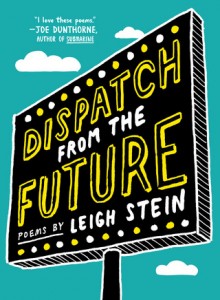 In an interview with girlslikegiants.wordpress.com, Leigh Stein lists the questions above as scenarios in which she hopes her readers might recognize themselves in her poems. While universal, these questions might seem strangely adolescent, and easy, for a writer whose star continues to rise in the contemporary poetry scene. The thing is, Leigh Stein’s poetry wants you to believe in its accessibility. With its references to Lindsey Lohan and Facebook and “The Notebook,” Stein’s debut collection, Dispatch from the Future, is very “present.” Everyone may know what she’s talking about (for example, she has compiled poems only using dialogue from “The Bachelorette”), but that has little to do with accessibility.

In the poem “If You See Them Tell Them I’m Stranded,” Stein writes:
“All I’ve ever wanted is to ask the same question./To answer he sends me sealed, empty envelopes.” Stein could well be speaking of her own poems; hard, shiny surfaces, which gleefully, slyly repel any attempt to go inwards. It is patently obvious that Stein is as intelligent as she is glib. She writes poems about Latvian pageant queens, sure, but just to remind you that we are still serious here, she also quotes Horace in the original Latin.

Leigh Stein has been heralded as an ambassador of twenty-something artists struggling to continue creating in a less than ideal world. A poem called “Immortality” says, “I took my medication and looked at pictures / of people who were not in love with me.” The reader’s mind immediately jumps to: anti-depressants & Facebook, both of which are old friends to many artsy 20-somethings. But that isn’t enough to make Stein’s frenetic poetry function as a go-between for disillusioned post-Ivies living in New York City and the ordinary world.

“Ditziness, for Stein, is a kind of dramatic irony by which her narrators can assert that they’re secretly smarter than their audience.” So says Alice Gregory, in her review of Stein’s collection on the Poetry Foundation. Another review calls the work “captivating even for the more ardent of poetry haters.” Whomever the audience may be, reading Dispatch from the Future means trying to see through or with Stein’s purposefully ditzy eye.

So why did Stein choose to write these poems? These slippery, impermeable poems? Stein’s work makes the most sense if looked at as an experiment or an action. In “Epistolophobia,” Stein writes, “Sometimes we put ourselves/in danger just to live and tell about it.” It seems like many of Stein’s poems exist “just to live and tell about it.” The hyper-intelligent flippancy that surfaces in nearly every poem will charm some readers, and infuriate others. It aims to do both.