The 29th Austin Jewish Book Fair was held October 28 through November 1 at the Dell Jewish Community Campus. It was a pleasure to sit with my “sistahs” again at the fair (Sisterhood members of Congregation Agudas Achim), but the contrast between last year and this was noticeable. Last year the fair opened with the book lover’s luncheon, and this year it closed with it, so at this year’s lunch the book shelves were relatively empty as earlier shoppers had already cleaned them out. I did, however, find enough selections in the children’s section for holiday gifts, including Jane Yolen and Mark Teague’s remake of their best-seller, How Do Dinosaurs Say Goodnight? Their new, equally charming title: How Do Dinosaurs Say Happy Chanukah? How could I resist? 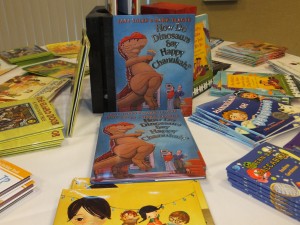 How Do Dinosaurs Say Happy Chanukah? and other children’s books on display

Two book fair events were cancelled due to Hurricane Sandy. Matti Friedman, author of The Aleppo Codex, and Harry Ostrer, author of Legacy: A Genetic History of the Jewish People, were unable to fly out of New York. Maggie Anton, author of the Rashi’s Daughters trilogy (somewhere between I.B. Singer’s Yentl and Anita Diamant’s The Red Tent), was the featured speaker for the book lover’s luncheon. She was able to attend as she was traveling from Los Angeles.

Anton was promoting her latest release, Rav Hisda’s Daughter, described as a “novel of love, the Talmud, and sorcery in third-century Babylonia.” I’m sure it is a fine novel, but Anton was not a fine presenter. The take-away lesson from her talk was: How do authors put off listeners? 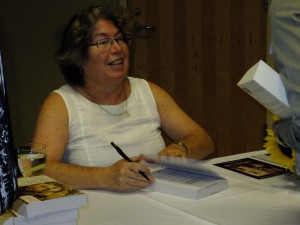 First, they offer mini-lectures on silencing cell phones. Second, they assume listeners will understand geographically-specific references. Like Anton, I am a graduate of The University of California, so I know what she means by “Subject A”—an English class required of freshmen who don’t score 600+ on the SAT. But I doubt anyone else in the audience knew what she was talking about. And third, they assume that their listeners, because of their geographic location, won’t understand certain references. Anton didn’t think her audience would be familiar with Sydney Taylor’s All of a Kind Family series. OK, for those of you not in the know, Sydney Taylor is the Jewish Laura Ingalls Wilder. Now who among you, dear readers, is not familiar with the Little House on the Prairie series? Please. Just because we’re in Texas doesn’t mean we’re yahoos.

Anton’s story of becoming a writer in her 50s was interesting. Apparently, she never imagined herself a writer, nor did she aspire to it. She had studied Talmud with Rachel Adler in Los Angeles. An idea about the famous daughters of the Talmudic scholar, Rashi, captivated her. She researched the subject extensively. Her personal circumstances allowed her to devote herself to writing. And, voila! One novel was born, and then another, and another, and now another.

Good luck to Anton, to the writers who could not attend, and to you, writers and readers, who hold tight to the words of authors you admire. And if you are ever in a position to address a group of admiring readers and potential book buyers, remember not to instruct the audience on cell phone etiquette and not to make assumptions about what your audience knows and doesn’t know. Be gracious and honorific. 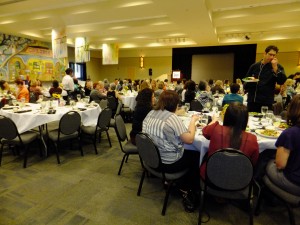 My seated sistahs at the Austin Jewish Book Fair