In an obvious nod to Spiegelman’s artistic genius, this animation video by Evgeny Morozov uses mice to represent citizens and cats to characterize authoritarian dictators and friendly fascists. The comparisons between Nazi Germany and contemporary forms of political genocide become obvious when you see Korea’s Kim Jong Il and Khadafi as kitties. This video produced by Cognitive Media in the UK is intended to make you stop and think. 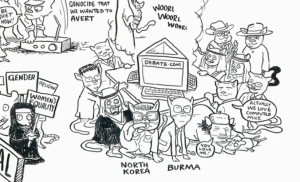 The widespread myth persists that dictators and authoritarian regimes do not like all this new electronic technology. China, Iran, Saudi Arabia, Korea and other regimes now use social media as a form of citizen surveillance. Crowdsourcing political repression is a state function of the new technology. Ironic it was the United States which objected loudest to WikiLeaks and scapegoated Julian Assange.

We confuse the intended uses of technology for their actual end uses. This  view of twitter in Iran , facebook in Egypt, and YouTube in Japan as politically transformative is a cyberutopian illusion. This is called iPod liberalism by Evgeny Morozov. The delusional thinking lies in believing that because people in other cultures adopt new technologies they will support Western values. Saudi Arabia encourages its citizens to search for YouTube videos that offend Saudi sensibilities. In so doing, Saudis report the material as offensive and hit a critical mass to censure certain YouTube videos.  Mubarak’s Egypt posted the faces of street demonstrators and crowdsourced their identification to round them up for political detention and perhaps torture. Twitter is a broadcast platform and it’s kind of like using a cop’s walkie-talkie to orchestrate a revolution.

Today people willingly give up information without knowing its end use. Their intended use of media is to enhance and expand their social networks yet technology the users of their information are at cross purposes.

There are moments when I’m on Facebook that creep me out in the same way this video does when it makes you think about how much information I disclose unnecessarily. This clever animation makes your head spin if you start to think about your own relationship to Google; uber-Big Brother.

The key thing to remember is that technology is neither inherently good nor evil; neither democratic nor fascist. It is how it is used and by whom that makes technology what it is, a tool in the hands of humans. When humans allow themselves to be used by technology, technocracy ensues.

This is part two by Dr. Jill D. Swenson of a two part series. Last Thursday’s post (part one) provided a slightly different viewpoint and was written by Lynn Rasmussen, co-owner of Social Energizer and Swenson Book Development.

We invite you to comment and rate each blog, so we can ever improve our offerings to you.