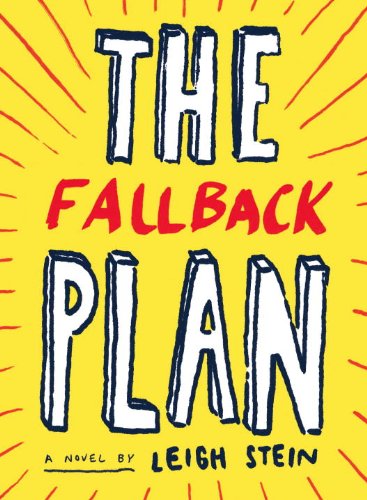 After the endless commencement ceremony, the cap toss, and the droning luncheons with family and friends, comes the panic-induced question asked by the college graduate: What next?  Debut author Leigh Stein accurately captures this bewilderment and sense of loss experienced by so many Generation Yer’s post-college in her first novel The Fallback Plan (Melville 2012) due out in January.

Esther Kohler- Stein’s Juno-esque protagonist- graduated from Northwestern with a theater degree, a lot of expectations and dwindling self-esteem. Between the suffocating realization that she is back in her childhood bedroom and the disappointing relationships she encounters in her home town, she feels worthless and believes the best thing that could happen would be to catch a fatal illness, or a least one that would leave her severely debilitated.  As per the typical graduate, Esther’s entitlement begins to get the better of her until she lands a babysitting job through a friend of her father’s. Babysitting for the 4-year-old May Brown gives Esther purpose, even though she finds herself in the middle of a family still reeling from the death of their infant daughter.

It is through learning how to cope with the unstable, grieving personalities of May’s parents, Amy and Nate, that Esther becomes aware of her own losses, and by novel’s end we see her make a healthy transition through the five stages of grief to acceptance and the next step.

What I love so much about Stein’s short -the work spans only 110 pages- but timely novel, is the way it acknowledges (like bad breath) the painful predicament of an increasing number of college graduates today. Her narrative: sardonic, with a pace that ebbs and flows based on topic- is peppered with the cultural 90’s references (Mario Kart, Lisa Loeb) and alternative tastes (Gustav Klimt wallpaper, Kundera’s The Unbearable Lightness of Being) familiar to the liberal arts graduate.

Stein uses her narrative to do more than tell the story. By splicing it with detailed flashbacks of Esther’s childhood and scenes from an imaginary screenplay the protagonist claims she is working on, Stein illustrates the painful loss of identity experienced post-commencement; an identity that Esther tries to fill by reaching back to a past she cannot reclaim or grasping for accomplishments expected of her as a theater major.

The Fallback Plan also explores the poignant themes of grief and loss that surround not only death, but the transition into adulthood and its realities. Stein aptly names post-college disillusionment for what it is: a loss of dreams, childhood, and- if moving in with parents- of independence. It is only by owning the loss she feels-rather than filling it with something of temporary value- that Esther is able to recover and begin to answer the What’s Next question.

In reading Stein’s work, I laughed, cried, and learned a lot about myself and the post-grad plight. Looking forward to more humorous and insightful  works by this blooming writer!