Our blog’s “Gone Local” series aims to explore who and what the Ithaca area’s literary community has to offer. Be it bookstores, publishers, or local authors, each contributes invaluably to the bookish zeitgeist. Recently, Swenson Book Development contacted Larson Publications (of Burdett, NY) to get an independent publisher’s views on the literary business, the craft, and the community.

Larson Publications started in 1982 as a North American subsidiary of Sweden’s Bokförlaget Robert Larson AB. Although they’d originally intended to be a general publisher, they soon merged with the Paul Brunton Philosophic Foundation. In 2007, Larson made the decision to reinvent itself as an independent company. Their motto is “global community; individual awakening.” We asked Amy Opperman Cash, publicity manager, about the current editorial focus of Larson Publications. She replied:

“Larson aspires to help find common ground on which men and women of informed good will, from all walks of life, can gather to meet together the urgent challenges of our times. We strive toward the discovery of unities deep enough to counter the rampant fragmentation of our cultures and personal lives.”

One of the most impressive things about Larson is its simultaneous commitment to an off-the-beaten-path mindset, and a contemporary, savvy view of the publishing industry. Its best-selling book (An Open Life: Joseph Campbell in Conversation with Michael Toms) has sold over 90,000 copies. That kind of bestseller status is no small feat for any publishing house. There’s no doubt that a large part of Larson’s success is its awareness of what Amy calls the publishing industry’s “climate change” in recent years. This change centers around the new definition of a successful author’s role, and the necessity of “social media, blogging, talks, workshops and generally building their own ‘platform’ of interested potential readers.” Since all publishers now expect this of authors, Amy says, the best strategy is to look for a like-minded publisher that will be supportive of your book and its ideas. Having a publisher working alongside you as an ally in these new promotional venues is invaluable.

When asked what Larson Publications sought in a successful book proposal, Amy referred us to the submission guidelines on the website. These guidelines examine a book proposal’s potential through four areas: subject, audience, qualifications, and connections. For example, regarding the subject of a proposal, Larson Publications asks:
“Of the many issues that threaten our mutual well-being on this earth together, which does your book address? What are you saying about it that hasn’t been said, or said well, or already ignored?”

The questioning format makes these guidelines intimidating. However, they are also more informative than those of a big publishing house, which expects a lot from a proposal but gives little hint of what that may be. One example of a book that Larson Publications has taken on is The Poet’s Daughter: Malek o’Shoara Bahar of Iran and the Immortal Song of Freedom by Parvaneh Bahar with Joan Aghevli. Of it, Amy writes:

“Thanks to Jill Swenson [CEO of Swenson Book Development], we were introduced [to The Poet’s Daughter]. This powerful memoir introduces Americans to the high-profile Iranian hero Malek o’Shoara Bahar—whose freedom poem “Morghe Sahar”-(“Bird of the Morning”) is sung regularly with great passion at rallies for human rights throughout Iran. Bahar (1882-1951) is revered internationally by progressive Iranians and celebrated as Iran’s best poet of the 20th century.

Bahar’s beloved daughter shares this poignant story and carries her father’s spirit of social justice for all, equality for women, and democratic values into her own work as a progressive activist in the USA—setting an inspiring example not only for Iranian women but for women throughout the world.” 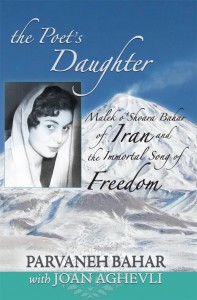 Be sure to check back soon for Jill’s review of this promising book. Thank you to Amy and the others at Larson Publications for such open and thoughtful responses to our questions. In regards to Larson’s opinion of Ithaca’s literary community, we agree that it’s “amazing how many creative thinkers, artists, and musicians are eager to learn and make a creative contribution toward improving the quality of life and life’s conditions.” Larson Publications embodies this kind of creative improvement.