Even the toughest cosmopolitans have a soft spot when it comes to their city’s most beloved bookstore. New York City has the Strand, Paris has Shakespeare and Company, and London (my favorite city of them all) has Foyles. In the last few years’ cinematic odes to NYC and Paris – New York, I Love You (2009) and Paris, Je T’aime (2006) – I was disappointed that neither the Strand nor Shakespeare and Company made an appearance. There’s yet to be a London, I Love You, so I haven’t given up hope for a director’s nod to the city’s ongoing love affair with Foyles.

Whatever London does, it does both seriously and exuberantly. Unlike New York, which seems hyper-aware of its sprawling self, each bit of London seems convinced that it and only it exists. Like an absent-minded professor reading Ulysses whilst crossing a four-way intersection, this trait is both charming and bemusing. Charing Cross Road, where Foyles’ flagship store is located, is a perfect example. A street that strikes joy into the heart of any bibliophile, the bookish avenue is sandwiched between the gleeful commercialism of Oxford Street, and the bustling glow of Leicester Square’s theater district. Once I’m on Charing Cross, I really do forget that there’s anything else in all of London besides books, books and more beautiful books. When a road makes you forget the rest of the world even during exam season, you know it’s love. You may have read “84 Charing Cross Road” or seen the film with Anne Bancroft and Anthony Hopkins. It’s the true story of a woman’s long-term correspondence with the staff of Marks & Co, an antiquarian bookstore. Marks & Co was actually located at 106 Charing Cross; here is a wonderful old advert from the same. 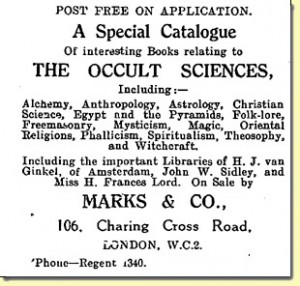 Charing Cross can be roughly divided by types of bookstores between tube stations. Wander between Leicester Square to Cambridge Circus, and you’ll find general second-hand and antiquarian shops, along with specialist bookstores. The nearby Cecil Court has smaller, quirkier selections. Further north, between Cambridge Circus and Oxford Street, you’ll find the bigger names: Foyles and Blackwell’s. Though there are five other Foyles locations, ask any Londoner where Foyles is, and they’ll point you to the Charing Cross store. It may seem odd that I’m devoting a locavore bookstore blogspot to a store that is far from the smallest or quirkiest bookstore in London. In fact, Foyles’ website states that they are “Europe’s largest bookshop.” So why Foyles?

For me, it began with my music professors. Whenever anyone needed a score, they’d send us to Foyles – not to one of the many speciality music shops in London, but to this multi-storied behemoth of a bookstore. The first time I climbed all the way to the 5th floor to hunt down an little-sold edition of a Ravel piece, I was too overwhelmed to even finish the search. Don’t be fooled: it looks like there are only 3 floors, but in that quietly mocking British way, the floors start at -1. Moreover, it isn’t content to have just one street address – it’s determined to be 113-119 Charing Cross Road. There’s a separate shop nestled on the fifth floor (Ray’s Jazz) for jazz music, a cafe, and even a bloody art gallery. It was just too much stimulus for a Ravel-centric trip. When I returned to my professor with another edition from a safe sheet music only store, he shook his head and said “I thought you’d never make it.” He proceeded to tell me how, in his student days, the sheet music at Foyles wasn’t even organized. It was shoved into metal filing cabinets, stacked on the staircases, piled on armchairs…and it was glorious. The serious students would get there early in the morning and spend the whole day excavating.

I fall in love with all things difficult and mysterious, so naturally I resolved to conquer Foyles. It was probably the other way around, but as Rick would have said, “Louis, I think this is the beginning of a beautiful friendship.” I came back to Foyles hundreds of times, sometimes for readings or concerts, sometimes for quiche, sometimes for Seamus Heaney’s newest book, sometimes for recommendations, sometimes for wrapping paper. Often I just came because I felt very far from everything familiar. Foyles, like an old friend, has that rare talent of absorbing lost souls and somehow reorienting them.

It may be one of several, but I will always regard Foyles as an extraordinary place. If you’re ever in London, I highly encourage you to get lost on Charing Cross Road, and to find something there – if not peace of mind, then at least a great book, and a new favorite haunt.

In the pre-dawn hours of February 18, 1942, three American warships zigzagged in convoy along the south coast of Newfoundland. Caught in a raging blizzard, the three ships ran aground on one of the most inhospitable stretches of coastline in the world—less than three miles apart, within eight minutes of each other. The Wilkes freed herself. The Truxton and Pollux could not. Fighting frigid temperatures, wild surf, and a heavy oil slick, a few sailors, through ingenuity and sheer grit, managed to gain shore—only to be stranded under cliffs some 200 feet high. From there, local miners mounted an arduous rescue mission. In Hard Aground, based on END_OF_DOCUMENT_TOKEN_TO_BE_REPLACED