Remember creating time capsules in elementary school? Perhaps you had to imagine what you would place inside: a front page of the daily newspaper, a cassette tape, or maybe a favorite toy? Such a capsule exists at the special collections department at Cornell University-but instead of relying on a shoebox full of ancient knick knacks, this awe-inspiring collection of literary material uses books to tell a story of our past.

The Division of Rare and Manuscript Collections, located in the climate-controlled lower level of Cornell’s Kroch (pronounced “Crock”) Library,  boasts 70 million maps, manuscripts, and photographs and over 400,000 rare books. Fulfilling my bibliophile dream, I had the opportunity to view a smattering of these well-persevered beauties up close upon a recent visit to the collection.

My tour guide is reference and instruction librarian, Lance Heidig, “The physical artifact is so important,” he explains while gently unpacking a 500-year old specimen.”It tells a story. Obviously the contents of the book are important, but the actual physical nature of this book tells us information about where this came from and how it was used.” He produces a prayer book from 1495. 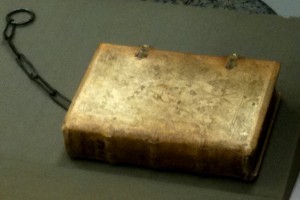 The covers, made of wood and bound in pig skin, bind a hybrid collection of Latin prayers, half of which are hand-written, and the other half done with the then incipient printing press. But perhaps the most interesting characteristic of this ancient tomb is the thick chain attached to its spine. “This is library security 15th century style,” jokes Lance. “Books were very, very expensive so this book was used probably by a monastery or a school and it was chained so people wouldn’t walk off with it.” A far cry from the magnetic stripped-library cards and over due fines of today!

A jump even further back in time we witness the oldest “book” of the Collection: a 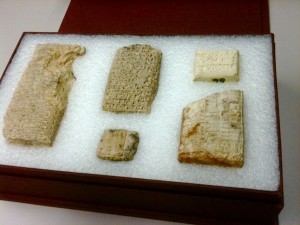 fragmented cuneiform tablet. Estimated to be between 2,000 and 4,000 years old, the Babylonian tablet was translated to reveal that it details daily business transactions in what is now modern-day Iraq. Lance comments, “It’s always curious what survives. You hope that you get the great literature of the time period. But what we have here are fairly simple business transactions.”

And then there are the more influential books, like this page from the Gutenburg Bible, 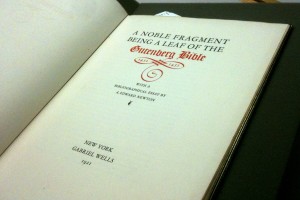 a work that, with the rise of the modern printing press, sparked Western Civilization’s literary revolution. Cornell does not own a copy of one of the 21 remaining intact bibles, but rather “a noble fragment” consisting of a passage from Corinthians, acquired after a damaged complete copy was dissected and sold to individual buyers.

Many of the rare  texts and manuscripts that comprise this collection are gifts from the personal library of Andrew Dixon White, Cornell’s first president. An avid book collector, White donated his collection of 30,000 volumes to the university upon his retirement in 1885. Reading was so important to White that his generous book donation came on the condition that a  fireproof structure be built to house his volumes. Today, this is the Hogwarts-esque A.D. White reading room. 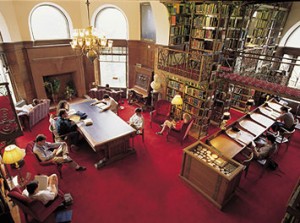 The room is still a popular study space at Cornell, though the majority of A.D. White’s books have since been moved to the Rare Collections for preservation.

Continuing on the tour, we jump forward to Victorian England: Cornell also owns a first edition of Charles Dickens’ Nicholas Nickelby in its original 1839 serial format. “These are wonderful because you’re seeing how his reading public first encountered his literature,” comments Lance, who notes that Dickens’ cliff-hangers that frequent the end of each chapter were a marketing technique encouraging readers to purchase the next 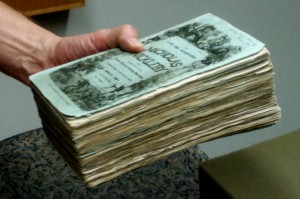 installment. Each slim chapter also contains Victorian-era advertisements peppered throughout. The popularity of these inexpensive paperbacks-a lucrative publishing method for Dickens-indicated a rising literary population during this time period.

Dickens makes an appearance in the collection with more than his writing. This plaque contains a piece of the author’s hair, snipped on the day of his death 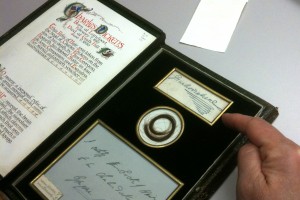 in1870. In keeping with the popular custom of the times, his sister-in-law and executor of his estate preserved the lock as a memento.

From the sacred to the irreverent, the 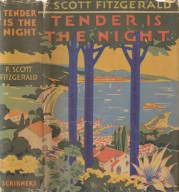 rare collection has something for everyone. By far my favorite is this signed copy of F. Scott Fitzgerald’s Tender is the Night. The University-owned first edition belonged to Fitzgerald’s close friend and esteemed film critic George Jean Nathan and across its cover page, in bold scrawl simply states “Dear George-what the hell? –Scott.” A perfect example of the

author’s disregard-or perhaps disbelief- of his popularity. And commenting on the culture is the colorful illustrated dust jacket, a growing marketing technique for books.

We end our tour where we began; at Cornell University with former Cornell professor Vladimir Nabokov. Pictured is a set of meticulous notes taken by a student of Nabokov’s 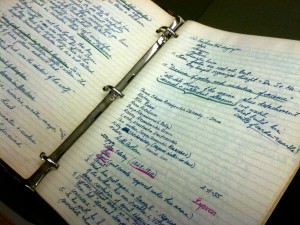 Introduction to the European Novel in February 1955. In blue fountain pen, the student spells out the late author’s notes on “what you need to read, qualities of a good reader: Imagination, Memory, Dictionary, and artistic sense.” I can almost see the focused student scribbling away as the stern Nabokov gives his lecture. The collection also holds an original copy of Nabokov’s letter to fellow instructor Morris Bishop, defending the controversial Lolita.

Cornell’s rare manuscript collection, from copies of the Gettysburg Address to 1970’s era fliers depicting the rise of Hip Hop, is a slide show of our history, and is just as much about the story surrounding the book or artifact as the story inside.  But as Heidig notes, the collection isn’t just concerned with the past; “It’s not just Dickens- we’re also collecting things that are being produced now, so people will be able to understand our culture.” The collection already owns a first-edition set of the Harry Potter books and is constantly scouting for contemporary materials to add to its trove.

Lance is positive about the rise of digitalism, noting that while someday “All books will be rare books,” the rare collections can benefit from the fact that information is going digital. “The artifact is still important but we can share that through digital culture now. We’re redefining reading, redefining books, possibly redefining learning.”

Who knows, perhaps the special collections tour for 2080 will include a Kindle® and a digital version of Isaacson’s Steve Jobs, or Tina Fey’s Bossypants. Only time will tell.

To discover more artifacts in Cornell’s Rare and Manuscript Collections or schedule a visit, check out:http://rmc.library.cornell.edu/