In light of the recent Mid-East upheavals, I came across this video that I consider a new perspective, and wanted to share it with you. The assumption has been that The Internet helps promote democracy. That’s what the Buzz Leaders tell us. You’ve probably heard the stories of bloggers and Twitter users helping to protest against evil dictators or unfair governments. In an effort to ‘keeping it real’ in this newly transparent world, I think opposing views should also be considered within today’s social media networks. 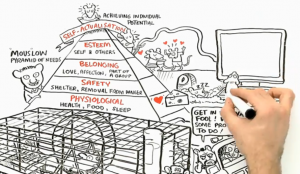 Does the Internet actually inhibit, not encourage democracy? That is the hypothesis of Evgeny Morozov of RSA Animate who presents this clever, alternative 11-minute rapid-art cartoon video on ‘cyber-utopianism’ entitled, “The Internet in Society: Empowering or Censoring Citizens?” Cyber-utopianism is the seductive idea that the Internet plays a largely emancipatory role in global politics. Evgeny questions this philosophy in his creative sketches that contrast Cyber Activism against Cyber Terrorism and the idea of Digital Native vs. Digital Immigrants.

He brings up terms, which were new to me, like Digital Renegades and Digital Captives, wondering how technology influences civic engagement and if it has the ability to actually create protests.

This is part one of a two part series by Lynn Rasmussen of Social Energizer and co-owner of Swenson Book Development. This Saturday, join us for a slightly different perspective by Dr. Jill D. Swenson.

We invite you to comment and rate each blog, so we can ever improve our offerings to you.