“A novel, biography, and memoir, all/three going at once.” This is how Kirsten Wasson describes her mother’s voracious literary appetite in the poem “One Way to Read.” The two lines, however, could well have been written to describe the author’s new collection of poems, Almost Everything Takes Forever, published by Antrim House Books. It is a lush, lithe, witty, emotionally frank series of postcards from the author’s life. 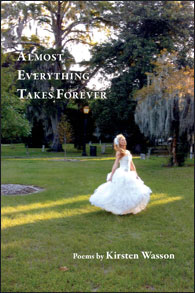 The book is divided into four sections: Season’s End, Otherworldliness Amused Her, The Long Dive, and Town at the End of Time. Each section focuses on a particular person: the first and last, the author; the second, her mother; the third, her son. The bookends, “Season’s End” and “Town at the End of Time”, are mainly about the inner landscapes of the speaker. Many of the poems take place in the space that lingers after an event: a journey, a conversation, or a dream.

“Otherworldliness Amused Her” is devoted to the author’s mother (Audrey Curley), the her in the section heading. Wasson conjures a fully-formed character, not unlike the one revealed to us in the first and last sections of the book. The subject of these poems is a traveler, a gourmand, and a packrat, who is at once maternal, independent, and ever so slightly lost. One of the most unusual poems in the collection, titled “Grocery List,” beautifully synthesizes the intimate and the mundane. With just a few ingredients, Wasson sketches a portrait whose clarity would usually take paragraphs to achieve: “BRIE, DIJON, CILANTRO”; “Only a child/could have eaten hot dogs in that kitchen where/for Thanksgiving we had paella.”

The role of the child mentioned in “Grocery List” takes center stage in “The Long Dive.” The author’s voice remains introspective, but takes on a new awareness, as in this stanza from “At The Park”:

Now I’m pushing: a mother among fathers
finding solace in sprinklers turned on
before the heat, the communion
of what we came for and how long we can stay.

In the poem “Evolution” we see the fullest description of the son, tracing the fault lines from infant to “almost-manliness,” sometimes burdensome, full of love, hyper-aware of the world around him. The voice in this group of poems conveys thicker-than-water closeness without alienating the reader. “His Long Dive” touches only briefly on the loneliness that comes with this kind of closeness. “My eyes fix/on dark water, a glimpse or two through the long dive.”

The book returns to the first person perspective in “Town at the End of Time.” As mentioned previously, the first and last sections are very similar in theme and outlook. At the same time, there is a mellowed, rounded sense to the writing in “Town at the End of Time” that was sharper and more anxious in “Season’s End.” Death and life bump elbows amicably, and nowhere more brilliantly than in “Hurricane Mortality.” Opening with a quote from The Inferno, the poem describes a gaudy, plastic afterlife through a visit to a Key West graveyard, where “practically/naked souls flip-flop around houses/where shingles fall, gargantuan pink hibiscus gloat.”

“Savannah Graveyard” is another study of death’s strange bedfellows, through the strange intersection of a Southern graveyard and a bridal-themed photoshoot (pictured on the cover, as photographed by the author). Wasson writes, “Then I’m close enough/to see my apparition. Satin flounces and blonde hair./A bride, not a ghost.” It is purposefully difficult to tell whether this is “my apparition” in the sense of ownership or self-recognition. This veiled self-awareness is also a new facet of “Town at the End of Time” as opposed to “Season’s End.” The final poem in the section, “Dunio: Last Day”, rings out like an amber-colored bell tone, clear and sweet. “At dinner under an olive tree, I consider/what I cannot keep: my suitcase says/there is too much to take home.” Yet Wasson does manage to keep everything she’s collected on her travels, scattered throughout the pages of Almost Everything Takes Forever.

The last sentence on the “About The Author” page reads: “She [Wasson] lives in Ithaca, New York, and another location yet to be determined.” This purposefully open-ended identity is especially poignant and humorous when lined up next to a stanza from “Plate Tectonics,” one of the first section’s poems.

Why travel to have confirmed
what you always suspected:
buried landscapes show us the heart
divides, not in half, but close enough.

This particular sentiment in Wasson’s writing calls to mind a modern Elizabeth Bishop (think “Questions of Travel”), another well-traveled, savvy, wryly ironic poet who also suffered from fernweh; “an ache for the distance.” Farsickness. Almost Everything Takes Forever really does take place in “another location yet to be determined,” whether it’s in a town at the end of time, or another otherworldly place.

Wasson’s poems are shaped carefully, but with abandon. Perhaps the lesson learned in “One Way to Read” (“irony/is the only saving grace”) allows her to write with such impressive control. Wherever a poem finds itself, one gets the sense that Wasson will be amused: at herself, at the place, at how otherworldliness remains “green and glistening,” and most of all, at how almost everything takes forever.

Kirsten Wasson grew up in central Illinois and earned degrees from Wesleyan University, Suny-Binghamton, and the University of Wisconsin. She teaches Multicultural American Literature at Ithaca College. In addition to being a widely published poet, she writes non-fiction, which has appeared in Ascent Magazine (on line) and The Ithaca Times. She lives in Ithaca, New York, and another location yet to be determined.

To order additional copies of this book or other Antrim House titles, contact the publisher at: AntrimHouse@comcast.net or the house website.