Austin hosted the  16th Texas Book Festival at the state capitol building October 22-23 with 250 authors presenting and 35,000 in attendance. Los Angeles may boast the much larger Los Angeles Times Festival of Book, which attracts as many as 140,000 visitors; but when you compare LA’s population of 9.8 million to Austin’s 800,000, you see that Austin pulled off a bigger, per capita turn out. And this in spite of other exciting events—the Austin Film Festival and the Gypsy Picnic Trailer Food Festival—that were competing for residents’ time and attention on the same weekend. 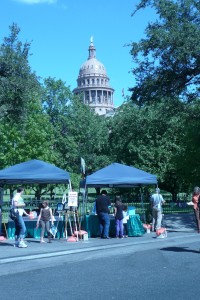 Texas braggadocio aside, the 2011 Texas Book Festival was truly impressive. The names of celebrated authors who presented are too many to list, so I’ll mention only one—Paula Deen who appeared at the historic Paramount Theatre downtown—because she is probably the most recognizable. But do not be misled that celebrity trumped substance in the selection of writers and books for this event. Follow these links from the Austin American Statesman and see for yourself who was there.

Because of other commitments, I was able to visit the festival for only one afternoon with the family in tow. We remained outside among the tents erected on the streets surrounding the capitol building grounds. One section was devoted to children’s books and entertainment; another to cooking demonstrations; and another to live music performances (in tune with Austin’s status as “live music capitol of the world”). 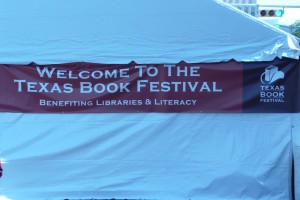 I spent my time in the tents populated by the university presses of Texas, small independent publishing houses, and individual authors. At The University of Texas Press table I scored a copy of the Official Guide to Texas State Parks and Historic Sites at 40 percent off the list price. After chatting with author Don Blevins, I bought A Priest, a Prostitute, and Some Other Early Texans because I found the title irresistible.

The festivities continued in the evening, no longer at the state capitol or the Paramount Theatre, but at restaurants, pubs, movie houses, and other venues throughout the city where authors read and musicians played for the “Lit Crawl,” as it’s called. A nighttime tour of the Texas State Cemetery with author Stephen Harrigan proved especially popular. According to one tweet, “every living person in Austin (was there) . . . it was like being in a cattle stampede.”

Former first lady, Laura Bush, spearheaded the development of the Texas Book Festival in 1995 with the purpose of promoting literacy and featuring Texas writers as well as nationally-recognized authors. Corporate sponsors with local, state and national presence make this event possible. Let’s take our 10-gallon hats off to them all.

As for next year’s festival . . . I’ll be back. But now that I have a better sense of the program’s scope, I’ll make other arrangements for the kids so my husband and I can enjoy the author presentations inside the capitol building. Maybe we’ll even make it to a Lit Crawl event at night. Until next year!