Brian McDonald has accepted an offer of publication for his new memoir, THE LONG SURRENDER (Working Title), from Wisdom Editions, an imprint of Calumet Editions for April 15, 2022. 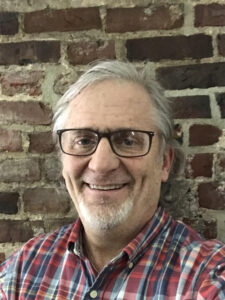 After 30 years of preaching, Brian Rush McDonald walked away from the pulpit. He had become a Jesus freak during the tumult of high school desegregation in the 70s in Mobile, Alabama, and then immersed himself in the dogma of fundamentalism at Bob Jones University. Anxiety about unsaved souls facing eternal damnation, doubts about harsh doctrine, and guilt about his sexual longings as a young adult—he attributed it all to Satanic attacks. He became a youth and music minister, married his high school sweetheart, and became a father to three children, but continued to wrestle with the rigidity of his religion. Discretely, he managed depression and anxiety with therapy and medication. He took his family to Taiwan where he became a missionary, experienced a different culture, learned a new language and broadened his life outlook. But discomfort with dogma and fundamentalism persisted and after seven years he returned to America and became a pastor for Chinese American churches. McDonald pursued a Ph.D. from The College of William & Mary where he came to understand himself better by studying spiritual development across the lifespan. Despite the somber nature of the subject, the book will entertain the reader with heartwarming stories of the author’s youth and later adventures, as well as the homespun wit of someone who grew up in the rural south. THE LONG SURRENDER is a riveting memoir about losing religion to find freedom.

Brian Rush McDonald grew up in Alabama, gave up his dream of becoming a musician to become a Jesus freak, and graduated from Bob Jones University. He spent nearly 30 years as a preacher, missionary, and pastor, including seven years in Taiwan where he learned to speak Mandarin Chinese. He earned a master’s degree from Liberty University and completed his Ph.D. at the College of William & Mary. He has taught at Johns Hopkins University and George Mason University as an adjunct professor of counseling. He plays trombone in several local bands, both classical and jazz. He and his wife Kathy have been married for 43 years. They enjoy sailing together on the Chesapeake Bay. They have three adult children and three grandchildren. McDonald is a psychotherapist in private practice in Alexandria, Virginia.

You can contact the author and learn more about the release of his new book here.