Congratulations to Bett Fitzpatrick whose new book of narrative nonfiction history, Hard Aground, will be released in Spring 2022 by Boulder Books, an independent publishing company in Newfoundland and Labrador. 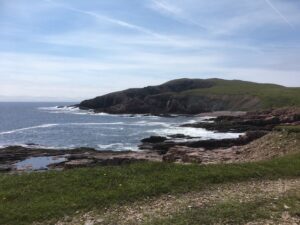 In the pre-dawn hours of February 18, 1942, three American warships zigzagged in convoy along the south coast of Newfoundland, heading for one of the worst disasters in American naval history. The USS Pollux and USS Truxtun, caught in a raging blizzard, ran aground on one of the most inhospitable stretches of coastline in the world. Fighting frigid temperatures, wild surf, and a heavy oil slick, a few sailors, through ingenuity and sheer grit, managed to gain shore—only to be stranded under cliffs some 200 feet high. From there, local miners mounted an arduous rescue operation. Having survived shipwreck, would the men survive their deliverance?

Based on eyewitness accounts of survivors and rescuers, and corroborated by archival and historical research, Fitzpatrick uses alternating viewpoints—switching from the crews’ gruelling efforts to save themselves, to the miners who carried the survivors up the cliffs on their backs, and to the people of St. Lawrence who opened their hearts and their homes to the victims. Among them are 18-year-old Seaman Edward Bergeron who scaled the cliff and brought help, Lanier Phillips, the only black man to survive, Ena, who collected food and blankets with her toboggan and snapped the only pictures of that horrific day, and Clara, who took the last survivor home and nursed him through the night. This is a story of tragedy, of heroism, and of the very best of human nature.

Bett Fitzpatrick was born and raised on the southeast coast of Newfoundland in the fishing and mining town of St. Lawrence. Its location on the heel of the boot that is the Burin Peninsula kicking out into the North Atlantic offered up the perfect place for a youngster to grow up—freely roaming its cliffs and beaches. Fitzpatrick is the author of Melanie Bluelake’s Dream (1995), the story of a First Nations girl who struggles to adjust to a new school, nominated for the Saskatchewan Book Award in Children’s Literature, the Ontario Library Association’s Silver Birch Award, and the Manitoba Children’s Choice Award. Bay Girl (1998) won the Saskatchewan Book Award in the Children’s Literature category. The Ontario Library Association nominated Whose Side Are You On? (2001) for its Red Maple Award. Bett returns to Newfoundland once more in Hard Aground, chronicling a tragic and transcendent true story about the kind of people who shaped her. Bett lives and writes in Kitchener, Ontario, Canada where she practices yoga, hikes weekly, and writes almost every day.