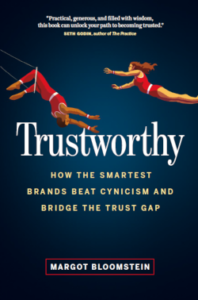 Margot Bloomstein launched new book, Trustworthy: How the Smartest Brands Beat Cynicism and Bridge the Trust Gap (Page Two), last week and there’s never been such a timely title for our troubled times. Cynicism has grown to gargantuan proportions in the past few years and too many people believe you can’t trust anyone or anything anymore. Brands — retail companies like Old Navy, tech firms like Mailchimp, federal agencies like the FBI, multimedia platforms like America’s Test Kitchen, news organizations like The New York Times, public health officials and local election boards — can and do  bridge the trust gap with voice, volume of detail, and vulnerability. Her book is relevant to every writer who wants their readers to trust what they have to say. 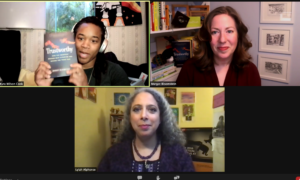 With the release of her book on March 2, Margot scheduled two bookstore events and a private party on Zoom. Her local independent bookstore, The Silver Unicorn, hosted a conversation between Boston Globe reporter Lylah Alphonse and Margot on Tuesday evening. On Thursday evening, the Twin Cities enjoyed an entertaining event with Carolyn Porter, author of Marcel’s Letters, and Margot Bloomstein. The hour long event sponosored by Magers & Quinn Booksellers went by too quickly. Host Annie Metcalf agreed to record the “afterparty” discussion about the design of Margot’s book cover. You can watch it here and learn why she consulted a trapeze artist.

The private launch party with family and friends who raised a toast to her book’s success was a virtual event on Zoom, too. Margot and her immediate family enjoyed tasting a special cake with buttercream frosting and a layer of raspberry filling. She had much to celebrate as her book landed at #2 in new releases in Media and Communications Industry books. 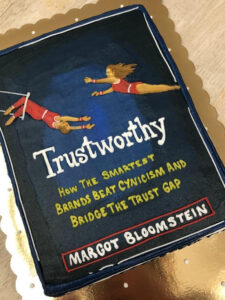 Margot Bloomstein has been able to gain national attention for Trustworthy working with a publicist, Mike Onorato at Smith Publicity. The week before launch, Jill Griffin interviewed Margot for a feature article “If You Want to Go Far, Go Together,” in Forbes. The day before release, Chief Learning Officer, a multimedia publication, released a video, “The power of leading with vulnerability and compassion,”  that featured some of the key take-away lessons from her book.

This Wednesday evening, Margot will meet virtually with more than 100 people in Seattle who are part of a content strategy group and you can join in the conversation at 6 pm PT by registering here. On Thursday evening, Riverstone Bookstore in Pittsburgh hosts Margot in conversation with book reviewer Kristofer Collins. You can join by registering here.

Next stop on her virtual book tour is Philadelphia where on March 18, she’ll be at Indy Hall, a coworking community at the intersection of designers, developers, writers, artists, entrepreneurs, scientists, educators, small business owners, and telecommuters. Books can be purchased in Philadelphia at A Novel Idea, an independent bookstore.

Organizing a book tour during a pandemic might seem like a challenge but in many ways it presented new opportunities. Because two hours after speaking in Philadelphia on March 18, she’ll be in San Francisco! There she’ll be giving a public guest lecture as part of the Spring 2021 Design Lecture Series at California College of the Arts. You can RSVP here for the link to the virtual event. You don’t need to be in either San Francisco or Philadelphia to participate.

Later this month, she’ll be in Milwaukee. Boswell Book Company in partnership with Brew City UX hosts Margot on March 31 at 6 pm for a conversation with Ash Dzick. You can grab your ticket here.

Congratulations to Margot Bloomstein on the release of her new book. Once you’ve read your copy, please consider leaving her a review on Amazon and/or Goodreads.

In the pre-dawn hours of February 18, 1942, three American warships zigzagged in convoy along the south coast of Newfoundland. Caught in a raging blizzard, the three ships ran aground on one of the most inhospitable stretches of coastline in the world—less than three miles apart, within eight minutes of each other. The Wilkes freed herself. The Truxton and Pollux could not. Fighting frigid temperatures, wild surf, and a heavy oil slick, a few sailors, through ingenuity and sheer grit, managed to gain shore—only to be stranded under cliffs some 200 feet high. From there, local miners mounted an arduous rescue mission. In Hard Aground, based on END_OF_DOCUMENT_TOKEN_TO_BE_REPLACED