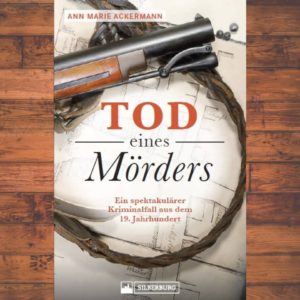 Congratulations to Ann Marie Ackermann! The German translation of her book Death of an Assassin: The True Story of the German Murderer Who Died Defending Robert E. Lee will be published in September by the Silberburg-Verlag publishing house.

Germany’s Federal Ministry of the Interior will sponsor her launch party as one of 16 nationwide events as part of their promotion of regional literature. The launch party will be held on the evenings of September 25 and 26 in the Zander Museum for Naïve Art at the spectacular Bönnigheim Palace, and speakers include the mayor of Bönnigheim on the first night, as well as the editor-in-chief of Silberburg-Verlag. Attendees will enjoy a champagne reception and a reenactment of scenes from the 1835 murder investigation. Several local actors will play a part in the presentation, including city council members, a local policeman, students in the school theater club, and the head of the Bönnigheim Historical Society. Afterward, there will be an opportunity to purchase a copy of the book and get it signed by Ann Marie Ackermann. The event is co-sponsored by the city of Bönnigheim and publishing house Silberburg-Verlag.

Then on April 5, 2020, the Museum im Steinhaus in Bönnigheim is opening an exhibit titled “Mord am Bönnigheimer Bürgermeister – Urknall der Kriminalballistik 1835” (Murder of Bönnigheim’s Mayor—Ballistics’ Big Bang) about the murder of Mayor Rieber almost 200 years ago and the case’s connection to the birth of forensic ballistics. The chief of the Baden-Württemberg State Police, Ralf Michelfelder, will be the main speaker, and festivities will include music, a museum tour, and a coffee and cake reception. The exhibit will feature highlights such as “a detective’s crime scene kit from the 19th century, a microscope the police use to compare bullets, period weapons, the original investigative file, and clues related to the case,” states Ackermann. Those who attend the exhibit will also have the chance to view several short films relating to the subject, including a five-minute presentation on the murderer’s escape route. The exhibit runs from April to October.

In the pre-dawn hours of February 18, 1942, three American warships zigzagged in convoy along the south coast of Newfoundland. Caught in a raging blizzard, the three ships ran aground on one of the most inhospitable stretches of coastline in the world—less than three miles apart, within eight minutes of each other. The Wilkes freed herself. The Truxton and Pollux could not. Fighting frigid temperatures, wild surf, and a heavy oil slick, a few sailors, through ingenuity and sheer grit, managed to gain shore—only to be stranded under cliffs some 200 feet high. From there, local miners mounted an arduous rescue mission. In Hard Aground, based on END_OF_DOCUMENT_TOKEN_TO_BE_REPLACED