If you’re a history lover or a fan of good mysteries, then Ann Marie Ackermann’s novel Death of an Assassin: The True Story of the German Murderer Who Died Defending Robert E. Lee is the book for you. This historical true crime novel details the story of a case that breaks several records, including coldest case ever solved, and intertwines both German and American history. Now, in large part because of the novel and its author Ann Marie Ackermann, another record is set to be broken next month in Gaithersburg, Maryland: the oldest reward for solving a murder case ever paid.

May 19 at the Gaithersburg Book Festival, Ann Marie Ackermann, accompanied by the current mayor of Bönnigheim, Germany, Kornelius Bamberger (pictured right), and Gaithersburg Mayor and Book Festival Founder Jud Ashman, will present the 146-year-old reward to the descendants of the man who provided the tip that solved the case. As explained on the Gaithersburg Book Festival website, “Frederick Rupp, a German immigrant in Washington, D.C., provided the crucial tip in 1872 that solved the murder, but the reward was never paid after the city council minutes recording the decision to offer the prize were misfiled and archived.”

Death of an Assassin has been awarded a bronze IPPY for the True Crime category. Conducted annually by the Independent Book Publisher Awards, the IPPY honors the best independently published titles from around the world. Congratulations to Ann Marie Ackermann.

In light of all this exciting news, I had the chance to interview Ann Marie Ackermann for Swenson Book Development, and I am thrilled to share it with you.

Swenson Book Development: What was your favorite part about writing this historical true crime story?

Ann Marie Ackermann: The discoveries I unearthed in the archives just floored me. When I first started researching, I thought I was just going to write a about a small-town murder for my local German historical society in Bönnigheim. But the case was so much bigger than anyone thought. This was 19th-century Germany’s coldest case ever solved and its only case solved in the USA: A German immigrant in Washington, DC provided the decisive tip 37 years later. I tracked the assassin’s flight to the United States to escape justice in Germany, only to discover that Robert E. Lee had written a letter about him without knowing his past history of crime. Lee’s praise turned the assassin into a symbol of the costs of the Mexican-American War, but his identity has been a mystery to Americans. So this case solves mysteries on both sides of the Atlantic! 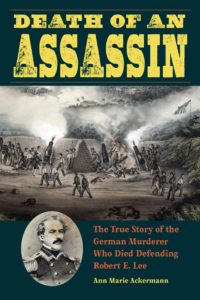 SBD: Extensive research went into writing Death of an Assassin. What did your research process look like?

AMA: I spent loads of time in the German archives and needed to learn to read the old German handwriting. The archivists were extremely helpful.

I did fly twice to Philadelphia to visit the archives there, but ended up hiring Gail McCormick, a talented Washington, DC archivist, to help me with research at the National Archives and Library of Congress. It was just too expensive for me to fly over the ocean every time I had a question. The material she found helped identify the German assassin as the object of Lee’s admiration.

SBD: How did your experience as an attorney with a focus on criminal and medical law come into play while writing this book?

AMA: Two things shape a criminal investigation: the law of criminal procedure and the forensic technology available to the detective. Those two aspects guided me in my research and analysis. And they bore fruit: I was able to show that the detective in this case was the first to use forensic ballistics. That’s another record right there!

My background in medical law gave me lots of experience reading autopsy reports, so it was really fun to read one from 1835. A cardiologist friend of mine helped me pick it apart and put it under the microscope of modern medicine. In some ways the doctors in 1835 were surprisingly modern; other aspects of their practice were oh-so-quaint.

SBD: What would you say was your biggest obstacle in writing and researching for Death of an Assassin?

AMA: Learning to read the old German handwriting! I’m so glad I did, though, because it opened so many doors in my research. The investigative file in this case alone is almost 800 pages. I couldn’t rely on friends and archivists to read it for me. When I got to the point I could read it myself, I unearthed so many interesting aspects of the case.

AMA: I’m so glad my book brought history alive for you! My hope, in writing Death of an Assassin, was that the true crime format would get some people reading about past events who wouldn’t otherwise have been interested. And from the feedback I’ve been getting from readers, it sounds like I reached that goal.

To delve into the minds of historical characters, I tried to use as many primary sources as possible. What did they themselves write about the events? And what did the people who were with them have to say? I tried to use that technique not only to put the reader into a historical character’s mind, but also to place the reader in the din of the battle scene at the climax of the book.

I also wanted to show there’s more to Robert E. Lee than just the Civil War. Even if the United States had never fought the Civil War, history books would still remember Lee for his accomplishments in opening the St. Louis harbor and in the Mexican-American War. Because the Civil War overshadows those parts of American history, they’re somewhat obscured. My research taught me new things about that period, and if this story opens people’s eyes to broader aspects of antebellum history, I’d be pleased.

AMA: The transition wasn’t too difficult. I’m German-American, already had blood relatives here, spoke the language, and of course I had my German husband. I’d describe the transition as an adventure, but it was one that taught me what it means to be American. Living in another culture is like holding up a mirror to better see your own.

Wherever I live, I try to look for the positive aspects, and I’ve come to appreciate Germany for its excellent education and health care system. I’ve enjoyed raising my children here. But I miss the United States too. 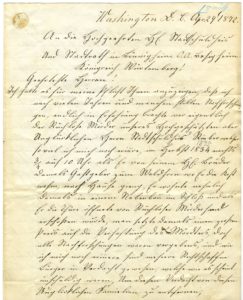 SBD: Next month at the Gaithersburg Book Festival in Maryland, you get to present a long-lost reward to the American descendants of the man who provided the tip that solved this record-breaking case. What are you most looking forward to about this experience?

AMA: Payment of the 146-year-old reward will bring closure to this case and pull a 19th-century story right into the present.

The city of Bönnigheim is applying for a Guinness World Record title for the oldest reward for solving a murder ever paid. If Guinness grants the title, the town of Bönnigheim and I will be popping so many champagne bottles you’ll probably hear us over in the United States. What could be a better way to draw a spotlight onto the town and my book? It’s an author’s dream, really, and I’m so glad my legwork on the reward is coming to fruition. I’ve been working a couple of years to make the reward happen.

Now I’m most looking forward to meeting the descendants – the flesh and blood embodiments of one of the characters I wrote about. They will be the focal point of the ceremony in Gaithersburg, and if they ever decide to visit Bönnigheim, they’ll be received as the descendants of a town hero.

SBD: What are your writing plans for the future?

AMA: So many Germans want to read this book too. Before I tackle a new project, I’m going to be assisting with the translation.

After that I have a couple of ideas in mind – more historical true crime in Germany, and a history of a European food and wine tradition that dates back to the Romans. I’d love to visit all the European countries that still follow the tradition, taste their wares, and put together a coffee table-like book of a pan-European custom.

Oh, and my kid still wants me to publish the bedtime stories I told him as a child. So there are lots of ideas.