Linda J. Spielman gave a presentation at the Nevins Center in the Cornell University Botanic Garden on July 16 at an event which celebrated the launch of her new book, A Field Guide to Tracking Mammals in the Northeast (Countryman Press/W.W. Norton). 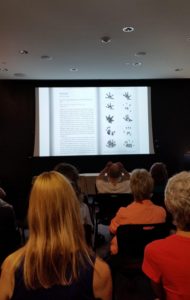 This wasn’t like any other book launch I’ve ever been to and I mean that in a good way. Cornell University provided eight rows of ten chairs and an overhead projection system. The large room backlit by panoramic views of the botanical gardens had been set up like a lecture hall.

People of all ages filled every seat, and an overflow of dear friends at the back of the room made for a spectacular turnout. After Linda’s lecture, the line for book signing went on for an hour. But it was Linda J. Spielman whom they had come to see as a teacher and tracker. And now I know why. Her presentation packed a punch. 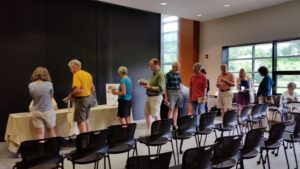 Tracking wildlife is a lot like doing scientific research of any kind. And Linda is a naturalist who looks and listens from the depth and breadth of multiple scientific disciplines. She began by describing her fascination as a child with what evidence she saw in the woods back behind their house. Evidence that made her wonder who had been there and what happened when she wasn’t there. 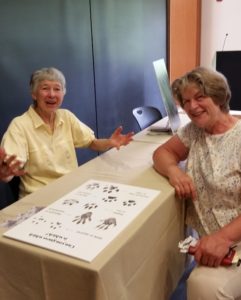 It’s the puzzle of figuring things out. What critter left that imprint in the mud? Who galloped across the field in the snow? The tracks, or evidence, tell a story. And Linda did that with a series of images in an overhead projection. She explained how tracks could be measured and what to observe: the distinguishing features to make the snowshoe hare identification. The gait at which the rabbit moved across the snow altered the way the tracks looked as a line across the field. Where it looked like legs had splayed in an abrupt stop on ice, Linda had us observe how the heel marked the snow much deeper as the rabbit stood up on its back legs and looked around before it jumped up and over that mound of snow-covered grass. Linda made me realize again how much value there is to be found in slowing down and looking and listening. Like a tracker. Like a detective, a scientist, a researcher, and a writer.

Tracking employs two skills—looking and listening—which are essential to good writing. Get outside and take a tracking expedition to hone these skills. Getting into the field as a writer is as important as the time spent in front of the computer screen. Empirical observations. This is the stuff of which the reader needs to make sense of the world you create with words and ideas in your manuscript. 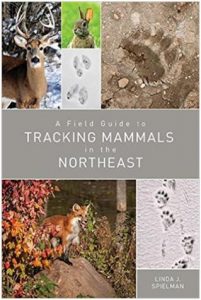 Linda has written a field guide that is unlike any other in its usefulness to readers. It is intended to help someone accurately identify tracks in the field. Learning how to think about measuring and describing impressions left behind as evidence is a scientific approach. But it is learning how to discern which mammal from the messy evidence that makes the book useful. Sometimes an animal puts the back paw in the same print as a front paw. Sometimes claws are extended and sometimes it’s only paw pads. And in my novice experiences, the tracks I saw in the field never looked anything like the cartoonish prints in other guide books.  Spielman is an artist who has hand-drawn with

pencil illustrations the tracks of 40 species in their multiple variations of gaits and strides.

Look. Listen. Look again. Take a measure or two. Make notes of your observations. Draw what you see. Listen. What questions are raised? What else do you observe? Tracking is a scientific mindset motivated by curiosity. Thanks to Linda Spielman for an inspiring author event.