Elizabeth Rynecki is the author of Chasing Portraits: A Great-Granddaughter’s Quest for her Lost Art Legacy published by NAL/Berkley/Penguin Random House in September 2016.

An odyssey spanning generations, decades, and countries, Chasing Portraits is the true story of Elizabeth Rynecki’s search for the lost art of her great-grandfather, Moshe Rynecki. His unique paintings focused primarily on the Jewish-Polish community in Warsaw between the first and second World Wars, providing a view of urban intellectual Jewish culture that was destroyed by the Nazis. Before he was taken from the Warsaw Ghetto to the concentration camp, Moshe Rynecki stowed away bundles of over 800 of his works. Chasing Portraits shows how frustrating, trying, emotional, and rewarding the search for his hidden pieces has been. She has found some of his oeuvre in museums, some in the homes of private collectors, and some in grainy photographs online. Elizabeth frequently faced trials in finding the art of her great-grandfather.

“I have never let go of the idea of wanting my great-grandfather’s paintings back. If someone has his work and can’t take care of it, or doesn’t want it, I am happy to accept paintings with open arms,” said Elizabeth when asked how she could give up on getting her family legacy back. “What I did come to realize is that there just wasn’t enough evidence to make a strong enough legal case. And when I realized I couldn’t fight for the return or restitution of the art, I also realized that there might be another form of justice for my great-grandfather’s art legacy. Writing the book and making the documentary has brought about a form of justice that I never imagined when I started this project – the ability to share his art and the story with so many people.” 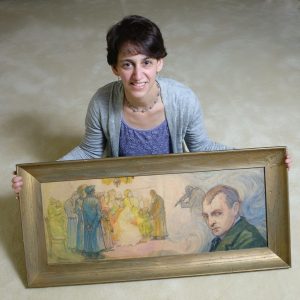 Elizabeth Rynecki grew up in California surrounded by her great-grandfather’s art in her home. Her father and grandfather survived the war in Poland but Moshe Rynecki did not survive a Nazi concentration camp. After the war, the family recovered only one bundle of his paintings from the basement of a bombed out building. His paintings hung in the home where she spent her childhood.

“One of the advantages of growing up with the art is that it just blended into the day-to-day parts of my life. The paintings were there for family dinners, when I did homework, or when friends came over to play. Sometimes I stared for a long time at one of the pieces I found compelling, or other times I might notice one out of the corner of my eye while grabbing my backpack and heading off to school. I came to know my great-grandfather’s art on a very intimate level of seeing it day in and day out. It’s a special way to spend time with art which probably explains why some people love the idea of spending the night at a museum,” Elizabeth Rynecki said in an interview.

Chasing Portraits is also the title of Ms. Rynecki’s documentary about her great-grandfather and his art. “There are a few more things that need to happen before the film can be submitted to festivals, but we’re getting there, and it’s exciting to be so close to the finish line.” Now, Ms. Rynecki is working hard to complete the documentary currently in post-production. Thankfully, she has the support of many—the Koret Foundation, Taube Philanthropies, the Conference on Jewish Material Claims Against Germany, an abundance of individual donors, and everyone who contributed to the successful Kickstarter campaign—who appreciate Moshe Rynecki’s artwork and want to help her achieve her goal of sharing his story with the world. Ms. Rynecki will screen a short trailer at her Appleton Public Library presentation.* 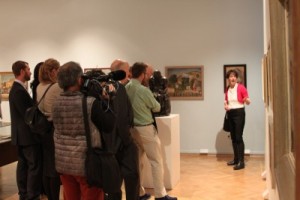 When asked about press she’s been getting for her book, Elizabeth expressed how much she truly appreciates the feature story in the New York Times and the great review in Kirkus. “When someone tells me they picked up the book because they loved the paintings on the cover, or that they were moved to tears by the book itself, those are the moments an author savors. I don’t relish making people cry, but I do love knowing that they found the book to be such an emotional read.”

“Why did he continue to paint the religious Jewish community when he lived a more secular life? Why did he go into the Warsaw Ghetto when his son, my grandpa George, could have probably gotten him out? Which painting was his favorite and why? Why did he avoid painting detailed portraits? Who are the young children in the portraits that he did paint?”

Although she will never know what Moshe’s favorite pieces were, some of her favorites include a colorful depiction of a fairground titled Luna Park, self-portraits that help her to see how he saw himself, and others which told stories. 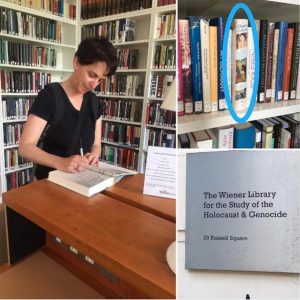 “There are scenes of everyday life which seem to whisper across the decades about what life might have been like for Polish-Jews in the interwar years and I love those pieces because they instill in me a sense of nostalgia for what was once a thriving Jewish community.”

Elizabeth will speak at the Appleton Public Library on October 9 from 6:30-7:30 pm.

*If you would like to donate money to help finish the documentary, make your check out to The National Center for Jewish Film [NCJF is the film’s 501c3 sponsor] with “Chasing Portraits” written in the memo line and send it to:

Or donations can be made by calling NCJF at 781-736-8600 and providing credit card information.

In the pre-dawn hours of February 18, 1942, three American warships zigzagged in convoy along the south coast of Newfoundland. Caught in a raging blizzard, the three ships ran aground on one of the most inhospitable stretches of coastline in the world—less than three miles apart, within eight minutes of each other. The Wilkes freed herself. The Truxton and Pollux could not. Fighting frigid temperatures, wild surf, and a heavy oil slick, a few sailors, through ingenuity and sheer grit, managed to gain shore—only to be stranded under cliffs some 200 feet high. From there, local miners mounted an arduous rescue mission. In Hard Aground, based on END_OF_DOCUMENT_TOKEN_TO_BE_REPLACED