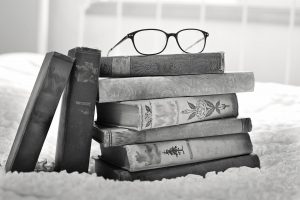 It’s no secret, I like history. It offers us lessons about the future.

You won’t be surprised then to hear this past year I’ve read a lot of books about the years in Europe leading up to WWII. From Richard

Halliburton’s world adventures as a swashbuckling celebrity travel writer in American Daredevil by Cathryn Prince to the international search for the incredible artwork of Moshe Rynecki, whose paintings offer a visual ethnography of Jewish life in Warsaw during the interwar years, I’ve read widely about the shifts in political and cultural winds. And what happened then bears relevance to what happens today. And tomorrow.

The Oxford word of the year for 2016 is post-truth. A recent Stanford study on students’ inability to discern fake news from legitimate news didn’t shock me. Or you, given current events in our country.

These are new nonfiction releases I can recommend on the subject which brings something new and fresh to understanding the Nazi era.

Elizabeth Rynecki has written a memoir, Chasing Portraits, about her transformation from claimant to art historian as the great-granddaughter of an artist killed in a concentration camp whose 800 paintings were hidden and most disappeared during the bombings of Warsaw. We learn about the legal complexities of Holocaust art restitution, crowdsourcing historical research, how each piece of art is a survivor with a story, and the backstory of making a documentary. This true story shows how much grey area lies between black and white, good and evil. This wasn’t Nazi-looted art and that makes it a more interesting story than Robert Edsel’s The Monuments Men. Her great-grandfather refused to leave Warsaw and trusted the Germans would come to their senses. Instead he was murdered in a concentration camp. Her grandfather escaped from Poland with his wife and son, Elizabeth’s father. Her grandmother didn’t want the stories of what happened to be retold. Her grandfather did, lest Elizabeth not know how it could happen again. When Elizabeth Rynecki began to discover her great-grandfather’s artwork, she asked only to see it but it was a surprise when the greatest resistance came from a Jewish woman in Israel. More than 70 years after the war, the stories are more shades of grey than either black or white.

Carolyn Porter found letters in an antique shop in Stillwater, Minnesota, and created an award-winning font based on the beautiful cursive penmanship by Marcel Heuze. When she translated the letters she

began to search for Marcel, a French Catholic metalworker forced under the Vichy regime to work for the Nazis in a Daimler factory making panther tanks in Berlin while his wife and daughters were in the French countryside in 1943-44. There is virtually nothing published about the Vichy period during which men were forced to labor for the Nazis and these touching first-person letters describe the conditions and circumstances with affectionate flourishes for his wife and daughters. While many German companies continue to deny their involvement in supporting Hitler’s regime, it is refreshing to discover Daimler has owned its past and cooperated with the research on Marcel Heuze and his internment in one of their labor camps. That Carolyn went to Paris in 2012 and found Marcel’s family makes this a contemporary story. You will fall in love with this true story, Marcel’s Letters: The Moving Story of a Font and One Man’s Fate, to be released June 6, 2017. You can pre-order this now.

Cathryn Prince has a knack for writing about little known or largely unknown stories and has published two noteworthy books about this period in history. Most people don’t know there were American POWs in Switzerland because they think it was a neutral country during WWII. Released in paperback in 2016, Shot from the Sky draws on the eyewitness testimony of surviving American prisoners. You might also like Death in the Baltic based on eyewitness accounts from the few survivors of the greatest maritime disaster, the sinking of the Wilhelm Gustloff. A Soviet torpedo in the Baltic hit the ship loaded with nearly 10,000 refugees fleeing Hitler from one direction and Stalin from the other. Ruta Sepetys has fictionalized the sinking of the Wilhelm Gustloff in January 1945 in her new historical novel, Salt to the Sea.

Dina Gold Stolen Legacy is the story of a former BBC journalist who searches for the place where her grandmother lived in Berlin before Hitler and the building across from Checkpoint Charlie where the family business had been headquartered. Diving deep into her family’s history leads her to seek restitution for a building but she had no documents to demonstrate family ownership. Recently re-released in paperback, it’s been updated and revised and reads like a nonfiction detective story. The new section includes discoveries since the first edition was released including information about the insurance company which had forced the family to relinquish the majestic downtown building to the Nazis. The role of insurance companies proves shocking. Not only did they play a key role in the Aryanization of the German economy long before stormtroopers forced the removal of Jews from their homes and businesses, but they had insurance policies on the concentration camps and profited nicely from the Nazi policies. Dina Gold also reveals how difficult and obfuscating the process to make a claim proved to be. This book is a testament to dogged determination to find the facts and determine the truth. Dina Gold discovered her grandmother had told her the truth after decades of searching for documentary evidence.

Nadja Spiegelman has written a memoir of mothers and daughters across four generations, from Paris to New York. While her father is famous as the creator of Maus, her mother, New Yorker art director Francoise Mouly, is an even larger force in shaping her life. When Nadja moves to Paris determined to get to know the woman her mother had fled, the differences between her mother’s memories and her grandmother’s reveal how each generation reshapes the past. I’m Supposed to Protect You From All This reveals the intergenerational effects of trauma and turbulence in life circumstances.

For children’s books there are so many strong classics, including Elie Wiesel’s Night, Art Spiegelman’s Maus, and The Diary of Anne Frank. But there are also wonderful new books which bring this period of history to life for young readers, and older readers like me who enjoy them immensely.

There have been many good books, fiction and nonfiction, published in the last few years about WWII and the Nazi era. In fiction, Anthony Doerr won the Pulitizer Prize for All the Light We Cannot See, Kristin Hannah’s The Nightingale, and Martha Hall Kelly’s Lilac Girls: A Novel. In nonfiction, The Lady in Gold by Anne Marie O’Connor and Edith Beer’s The Nazi Officer’s Wife.

The days are numbered one by one as we continue to lose those who lived through the horrors of World War II and survived. Learning from their stories and from putting things into a historical context can help us create a future informed by what has come before.

What new books have you read about the Holocaust, Nazi-looted art, or growing up under Fascism you can recommend to readers who reflect on the relevance of WWII to current events?

In the pre-dawn hours of February 18, 1942, three American warships zigzagged in convoy along the south coast of Newfoundland. Caught in a raging blizzard, the three ships ran aground on one of the most inhospitable stretches of coastline in the world—less than three miles apart, within eight minutes of each other. The Wilkes freed herself. The Truxton and Pollux could not. Fighting frigid temperatures, wild surf, and a heavy oil slick, a few sailors, through ingenuity and sheer grit, managed to gain shore—only to be stranded under cliffs some 200 feet high. From there, local miners mounted an arduous rescue mission. In Hard Aground, based on END_OF_DOCUMENT_TOKEN_TO_BE_REPLACED