Larry Scheckel’s I Always Wondered About That will be published by Tumblehome Learning in Fall 2017. This new book has 101 scientific answers to questions you ponder while driving, mowing the lawn, or watching a beautiful sunset.

Jill Swenson: When did you first become excited about science? 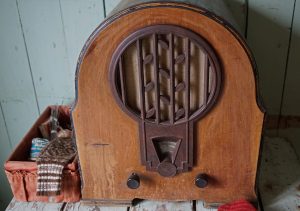 Larry Scheckel: We did not have a television set when I was a kid on the farm in the mid-1940s and 1950s. But we had a Philco radio and listened to westerns such as Roy Rodgers, Gene Autry, Hopalong Cassidy, the Cisco Kid, Sargent Preston the North, and the Lone Ranger. Peeking in the back of the radio, I could see pinpoints of light, which I later learned were the filaments of vacuum tubes. If I turned the tuner knob on the front of the radio, a different station would come in—sometimes from St. Louis, even from the deep South, such as Del Rio, Texas. That tuner knob enabled a set of metal plates to mesh together. I later learned it was the tuning capacitor, part of a special circuit that selected different frequencies. I was fascinated with the idea that a human voice could travel through the air for hundreds of miles and produce sound as if it were right in our living room. I wondered how that was possible.

Jill Swenson: What books do you remember reading before high school that influenced your scientific curiosity? 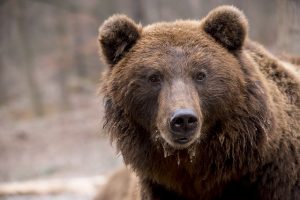 Larry Scheckel: A book in our Oak Grove one-room country school featured brown bears in Alaska. A hunter lay trapped under the brown bear—a frightful look on his face. This brown bear was huge—much bigger than the cows and horses we had on our farm. In my mind, I put myself in that hunter’s place and tried to imagine how I would react. Another book had a picture of a car moving through an opening in a giant California Redwood. I read an autobiography by Charles Lindbergh titled We.  I loved reading biographies of inventors, such as Thomas Edison, Samuel Morse, and Robert Fulton.

Jill Swenson: How did you come up with all these questions so many of us wonder about?

Larry Scheckel: About 80 percent of the questions come from kids and about 20 percent from adults. The questions from youngsters are gathered by their teachers, and a few are emailed to me directly.

Jill Swenson: What are your favorite three questions you answer in this book?

Where does the white go when snow melts? Are there questions science can’t answer? Why do things have to die?

Jill Swenson: My favorite is the one about time travel and the exciting new breakthroughs in Einstein’s theory of relativity. What I found fascinating is the principle that time travel could only be possible into the future and never into the past. For writers of science fiction and fantasy, this closes some doors and opens others to the realm of plausibility. Tell us the truth. Is time travel possible? [100 words]

Larry Scheckel: Time travel to the future is possible and the laws of science do not prevent it. In 1935, Albert Einstein and Nathan Rosen used the theory of general relativity to propose the existence of “bridges” through space and time. These bridges, or wormholes, connect two different points in space. Space and time are tangled to form something called the space time continuum. These wormholes are highly speculative and is not a phenomena that will happen soon. Travel back to the past is not possible due to the concept of causality.

Jill Swenson: You have also written a memoir about growing up in Wisconsin and your voice and style remind me a great deal of Jerry Apps and John Hildebrand, two of the state’s most distinctive voices of rural life. Tell us the story of Seneca Seasons. 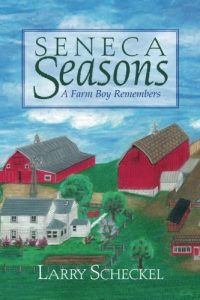 Larry Scheckel: Seneca Seasons: A Farm Boy Remembers is an account of my growing up on a 238-acre farm in the middle of Crawford County, Wisconsin in the 1940s and 1950s, with Dad, Mom, and eight siblings. The one-room country school with one teacher and 28 students in a building about the size of a 2-car garage figures prominently in my account. The school, a one-mile walk each way, was the social heart of the community of farmers of Norwegian, English, and German ancestry. The Fall Basket Social, the Christmas program, and the end-of-the-year picnic was attended by everyone on Oak Grove Ridge. Seneca Seasons is the story of plowing and planting, cultivating and harvesting, milking cows, raising chickens, haying, the threshing machine, the endless chores, long hot summer days, and snowstorms. It is also a narrative of my closeness with a brother a year younger and a brother a year older than myself; a tale of corncob fights, fishing at Cold Springs along the Mississippi River, riding our farm horses bareback, drowning out gophers, playing baseball, serving at Mass at St. Patrick’s Catholic Church, setting off firecrackers, and hunting squirrels. The one-room school, the farm, the large family, our faith, and the neighbors are all a part of me.

Jill Swenson: Your new book will come out later this year or spring of 2018 from Tumblehome Learning, a publisher committed to helping kids imagine themselves as young scientists or engineers and encourages them to experience science through adventure and discovery. Describe your new book and your intended audience. And let us know how readers can connect with you.

Larry Scheckel: The audience for the new book, tentatively titled I Always Wondered About That is for people who are interested in science, reason, and how things work. It is for those who want to increase their understanding of how the physical world works. Many parents who want to feel competent in helping their children with science and math homework will enjoy this book. Surveys show parents want more math and science education. Americans are hungry for answers and solutions to divisive and complex issues, and do want to work together to find solutions. Americans are also convinced math and science skills are crucial for the future and the overwhelming majority say studying advanced math and science is useful even for students who don’t pursue a career in Science, Technology, Engineering, and Math (STEM). I Always Wondered About That is also a fun read for all ages.

In the pre-dawn hours of February 18, 1942, three American warships zigzagged in convoy along the south coast of Newfoundland. Caught in a raging blizzard, the three ships ran aground on one of the most inhospitable stretches of coastline in the world—less than three miles apart, within eight minutes of each other. The Wilkes freed herself. The Truxton and Pollux could not. Fighting frigid temperatures, wild surf, and a heavy oil slick, a few sailors, through ingenuity and sheer grit, managed to gain shore—only to be stranded under cliffs some 200 feet high. From there, local miners mounted an arduous rescue mission. In Hard Aground, based on END_OF_DOCUMENT_TOKEN_TO_BE_REPLACED