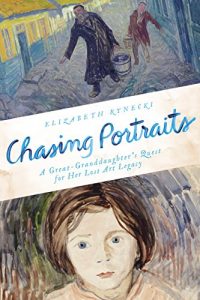 Chasing Portraits: A Great-Granddaughter’s Quest for Her Lost Art Legacy by Elizabeth Rynecki, is the story of her search for the art of her great-grandfather, which disappeared after he was killed in the Majdanek concentration camp. Moshe Rynecki’s body of work reached close to eight hundred paintings and sculptures, which he created between the First and Second World Wars in Warsaw, Poland. Recently, I interviewed her about her research, writing the book, and working on the documentary film.

Trace Sonnleitner: The interactions you portray between Moshe and his parents, and between you and your parents, and grandparents, remind me of some generational differences in my own family. When I ask them questions about their past they are usually answered with quickly worded stories that make me laugh, or draw out my sympathetic emotions. Did you intentionally display these generational differences in your own family?

Elizabeth Rynecki: My goal was to tell the story of my great-grandfather’s art, but it quickly became clear that each generation—the artist, his father, his son, my Dad, and I—had very different relationships to the art. My great-grandfather, the artist, felt an incredible compulsion to paint. His son, my Grandpa George, understood the historical importance of his father’s work, especially in light of his death in the Holocaust. Dad understood his father’s love of the art and asked me to build a website to make the art more accessible to others.

I have taken Dad’s initial steps and pushed an even more expansive view—to uncover details about the past so audiences might better appreciate and understand the history of the collection. Each generation’s expertise played a slightly different role in shaping how the next generation would experience and make sense of the art and its history.

Trace Sonnleitner: What have you learned about the Jewish community in Warsaw before the war that went beyond your interest in learning about your great-grandfather and his art?

Elizabeth Rynecki: Warsaw was called Paris of the East during the interwar years, in part, because it was once such a flourishing intellectual, business, and cultural community. I also learned the Jewish art scene in Warsaw was flourishing during the interwar years and that my great-grandfather was an active member of an organization that promoted and exhibited Jewish artists.

Trace Sonnleitner: You turn a bright light on some of the darkest memories and give us an insider’s view of the life of Polish Jews through your great grandfather and his artwork. His mission to portray “people’s work, lives, and religion,” which he believed,” are important, worth thinking about, and worth remembering.” What is your mission?

Elizabeth Rynecki: My goal has always been to share my great-grandfather’s art with others. His art is aesthetically beautiful and historically important, and if telling my family’s personal story helps to bring more attention to his oeuvre, then I feel like I’ve done my job.

Trace Sonnleitner: You asked questions no one wanted to answer. How did you find the courage to ask them when you could sense fear of these memories?

Elizabeth Rynecki: At some point, you realize that if you don’t ask the questions, there will be no one left to give you answers. If people really don’t want to answer questions, they’ll let you know. And if the answers you get are fragments of history, or outright deflections, then that, too, is part of the story.

Trace Sonnleitner: Have others contacted you for help in their research about relatives or Nazi-era art?

Elizabeth Rynecki: Over the years, a few people have reached out to tell me their stories or to ask for help. Every case of Holocaust era looted art is different, and I always suggest people speak to an attorney and/or the Holocaust Claims Processing Office.

As for offering research advice for tracking down information about relatives, I generally suggest connecting with a genealogical organization and research archives like the ones offered by the International Tracing Service, Yad Vashem, the US Holocaust Memorial Museum, and the Joint Distribution Committee. Yizkor books—usually in Hebrew or Yiddish, but increasingly available in translation, these memorial books describe Jewish life and individuals from communities destroyed in the Holocaust—are often good resources. If one is searching for a unique enough name, sometimes it’s a good idea to start with Google. If someone says they want to read more widely on the Second World War and looted art, the bibliography in my book lists quite a number of books worth reading.

Trace Sonnleitner: In your opinion, do you think these works of art belong to the artist’s family, on display in museums, belong to certain countries as objects of national importance, or, should they be on display for everyone to see?

Elizabeth Rynecki: It’s complicated. Every single painting is a different case and there are rarely easy solutions that make everyone happy. I believe laws, legal fees, provenance research expenses, as well as emotional and familial stresses can make navigating all of these elements emotionally exhausting and financially draining.

I definitely don’t believe in the schoolyard philosophy of “finders keepers, losers weepers.” I am a firm believer that if it’s not yours, give it back. But I also believe there are different ways to achieve historical justice, if not legal justice. I believe in giving voice to the families whose assets were looted or sold under duress, and museums should be better about investigating the provenance of the works in their collection. I believe culture belongs to all of us and I love anything that helps make art in museums and private collections more accessible.

Trace Sonnleitner: You are working on a documentary by the same title, Chasing Portraits. How are the book and film similar and how are they different?

Elizabeth Rynecki: The book and film are companion pieces. You can certainly read the book and not watch the film, but together they complement each other. The story arc in the book is understanding my shift from being a claimant to navigating the story as a historian. The film is certainly about the art and meeting with those in possession of my great-grandfather’s art, but there is a greater emphasis in the film about my relationship with my Dad and the family legacy.

I am currently working on finishing the film. We are in post-production. To give you a bit of a sense of our progress, we took 100 plus hours of footage and narrowed it down to the core scenes we felt could best tell the story. In many ways, it’s like working with a manuscript. You have so much you want to say, and a lot of it is important, but at some point, you know it just doesn’t all fit.

Trace Sonnleitner: What has been the greatest reward from working on the book and documentary about your great-grandfather, Moshe Rynecki? 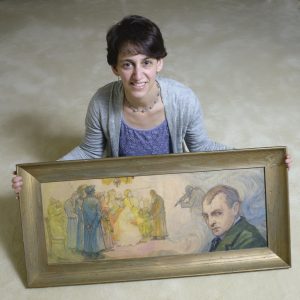 Elizabeth Rynecki: There are so many rewards and riches in writing a book and working on a documentary film. I’ve been fortunate to meet so many kind, caring, and compassionate individuals who believed in the story and worked in different ways to help make it all happen.

Some gave money, some gave their time, others offered their expertise and connections, and some helped me to become a better storyteller, while others simply rooted from the sidelines. There is not a single greatest reward, for much of the reward is the journey itself.

2 thoughts on “Q & A with Elizabeth Rynecki”