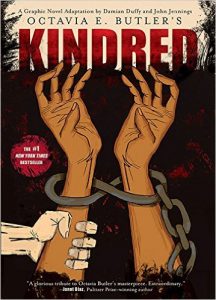 I feel anger when I look at the cover of the new graphic novel adaption of Kindred, originally written by Octavia Butler in 1979.

The cover shows two wrists bound, and the colors are red, beige, brown and black. The uplifted arms are brown, the handcuffs are black, and the hand grasping one wrist is beige. The title, Kindred, in red burns upwards from the finger tips. It is not an easy cover to look at: it promises a painful story ahead for the reader. 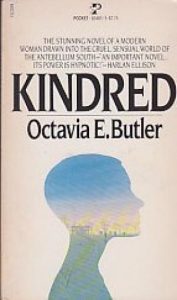 The mass-market paperback I originally read in 1979 has a cover with a black woman’s face in profile, shades of deep earth to cities to sky in her silhouette. The story itself, when I read it 27 years ago, was a tough one to stomach. A black woman writer from 1976, Dana, finds herself without explanation stuck in the pre-Civil War south. Upon arrival she sees a boy drowning and saves him. She is severely beaten by the white boy’s mother who assumes Dana is trying to kill her son.

Dana is thrust back and forth between her present to this past in which slavery is assumed to be a natural moral value. She is transported to the time whenever this boy faces danger. She is brought back to her present only when her life is endangered. 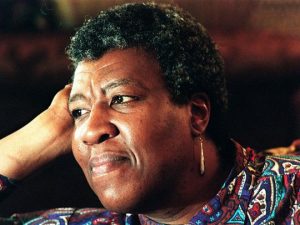 Octavia Estelle Butler was born on June 22, 1947 in Pasedena, California. She was very shy and awkward, spending a lot of her free time at the public library. At age 10 she asked for and received a typewriter for her birthday, and began to write. Butler received her degree in history and art from Pasadena City College in 1968 but also went on to study at California State University in L.A. 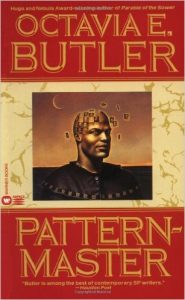 Her first science fiction story was published in 1971 when she was 24 years old. Her first novel, Patternmaster, was published five years later. Harlan Ellison became her mentor, and Samuel Delany became a good friend during these years. 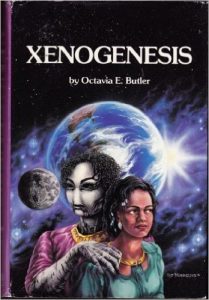 After publication of Kindred in 1979, Butler was able to support herself through her writing, and she went on to write the Xenogenesis series that explores the connections of race and genetics. Butler viewed science fiction as the best way to imagine cultural possibilities, looking at fictional social orders.

In 1984, Butler receive a Hugo Award for her story, “Speech Sounds” (first published in the Isaac Asimov Science Fiction Magazine). She believed science fiction made it possible for her to write about racism, sexism and class divisions. Her novelette, Bloodchild, won a Hugo and Nebula Award in 1985. Butler’s writing features strong, feminist black women as protagonists.

She received a “genius” MacArthur grant in 1995, the first science fiction author to receive this honor. Octavia Butler moved to Seattle in 1999 and struggled with health issues and writer’s block for many years. Her final novel, Fledgling (2005), about family structures in a vampire culture, reimagines illness, particularly in light of HIV/AIDS. [insert cover image of Fledgling]

She died on Feb. 24, 2006, at the age of 58, possibly as the result of a stroke. Her writing continues to be thought-provoking and relevant today. It is no wonder that her novel Kindred is widely read in college courses. New audiences and old fans will appreciate the graphic novel adaptation by John Jennings and Damian Duffy.

When I originally read this novel of time travel and slave narrative, I was shocked by the brutality of the story. I had vivid images from my reading that never left me. Decades later.

When I picked up this new adaption by John Jennings and Damian Duffy, I knew they understood what a powerful novel Octavia Butler had written. I felt angry when I saw the cover, but the anger was directed where it belongs—at the cruelty of early white Southern slave owners. Jennings and Duffy take the visual elements of the novel and make them even more real, which impressed me, so many years later.

I have never been drawn to graphic novels, even though I know Persepolis, by Marjane Satrapi caught independent bookstores by storm in 2003. I liked comic books as a child, although they were discredited as worthy reading by adults during the 1960’s. But I had followed John Jennings work since he did a cover for the Liminal series by Ayize Jama-Everett. I felt that he, of anyone, could represent Octavia Butler’s novel in a worthy way.

The new graphic adaptation is raw and harsh, and stays faithfully true to the original novel. In my mind now, they blend as if they were both part of a whole. This is not an easy story to read, but understanding slavery’s legacy makes this relevant today.

I think the graphic nature of the adaption is even better than a movie. The images are razor sharp, and the contrasts with 1976, and even today, 2017, are sharp.

The New York Times as of February 2017 discontinued its graphic novel best-seller lists, as part of a larger effort to streamline the company’s weekly published book-sales compilations. Kindred made it to #1 on this list before it was taken down.

A new generation will come to know Octavio Butler’s work with this new edition. I hope Kindred: The Graphic Novel Adaption by John Jennings and Damian Duffy will not disappear into time because of the historical moral reality it brings to its readers.

In the pre-dawn hours of February 18, 1942, three American warships zigzagged in convoy along the south coast of Newfoundland. Caught in a raging blizzard, the three ships ran aground on one of the most inhospitable stretches of coastline in the world—less than three miles apart, within eight minutes of each other. The Wilkes freed herself. The Truxton and Pollux could not. Fighting frigid temperatures, wild surf, and a heavy oil slick, a few sailors, through ingenuity and sheer grit, managed to gain shore—only to be stranded under cliffs some 200 feet high. From there, local miners mounted an arduous rescue mission. In Hard Aground, based on END_OF_DOCUMENT_TOKEN_TO_BE_REPLACED

One thought on “Kindred: A Graphic Novel Adaptation”