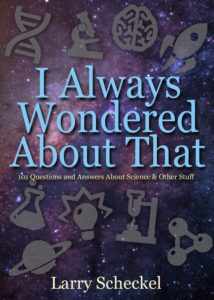 On December 1, Tumblehome Learning will release of Larry Scheckel’s new book, I Always Wondered About That: 101 Questions about Science and Other Stuff. Entertaining and educational, this book applies science to phenomena that are part of our everyday lives with questions and answers that appeal both to science nerds and those who struggled through high school chemistry class. Hypothetical, irreverent, and quirky questions—the kind you think of when driving down the road, mowing the lawn, or contemplating a sunset—are answered here with both wit and wisdom. It’s a perfect holiday gift and available for pre-order now.

Is time travel possible? Why are raindrops round? How far is it to the horizon? Why doesn’t the longest day of the year have the earliest sunrise? If you are in a falling elevator, can you save yourself by jumping up just before it hits ground level? Why is there a big E at the top of the eye chart? These and other questions are answered in language even a fifth grader can understand.

Larry Scheckel has been named Tomah Teacher of the Year three times, and Presidential Awardee at the state level for six years. He is the recipient of the Tandy Award, Kohl Award, Wisconsin Physics Teacher Award, Health Physics Society Award, Ron Gibbs Award, and Excellence in Science Teaching Award. He has authored articles for The Science Teacher and The Physics Teacher. He has been a Science Olympiad coach, robotics mentor, organized field trip and star gazing sessions, and given orientation flights to students.

Scheckel has shared his expertise with teachers at National Science Teacher Association conventions, Wisconsin Society of Science Teachers, and summer workshops. He has given presentations to thousands of adults and students in such venues as Children’s Museums, Boys and Girls Clubs, Rotary, and conventions. 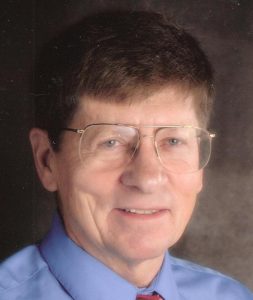 Larry likes to bicycle in the Driftless area of south central Wisconsin, jog on the back roads, fly a Cessna 150 over the verdant countryside, work crossword puzzles, read newspapers, play guitar, read history books and trade magazines, and fly radio controlled planes. He and his wife, Ann, recently returned from a trip to Israel.

He dedicated this new book to his two grandchildren, Teddy and Marit Scheckel. He takes pride in the fact he taught them how to climb a treet fort, take a drink of water from a running garden hose, get worms out of the ground with electricity, and ride a Spree motorcycle.

In the pre-dawn hours of February 18, 1942, three American warships zigzagged in convoy along the south coast of Newfoundland. Caught in a raging blizzard, the three ships ran aground on one of the most inhospitable stretches of coastline in the world—less than three miles apart, within eight minutes of each other. The Wilkes freed herself. The Truxton and Pollux could not. Fighting frigid temperatures, wild surf, and a heavy oil slick, a few sailors, through ingenuity and sheer grit, managed to gain shore—only to be stranded under cliffs some 200 feet high. From there, local miners mounted an arduous rescue mission. In Hard Aground, based on END_OF_DOCUMENT_TOKEN_TO_BE_REPLACED

2 thoughts on “I Always Wondered About That”