Swenson Book Development LLC is thrilled to see four new books by its clients scheduled for publication in 2017. If you’re interested in history, science, or economics, you’ll want to put these books on your To-Be-Read list for this year. 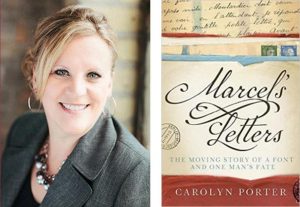 About the book: A graphic designer’s search for inspiration leads to a cache of letters and the mystery of one man’s fate during World War II.

Seeking inspiration for a new font design in an antique store in small-town Stillwater, Minnesota, graphic designer, Carolyn Porter, stumbled across a bundle of letters and was immediately drawn to their beautifully expressive pen-and-ink handwriting. She could not read the letters—they were in French—but she noticed all of them had been signed by a man named Marcel and mailed from Berlin to his family in France during the middle of World War II.

As Carolyn grappled with designing the font, she decided to have one of Marcel’s letters translated. Reading it opened a portal to a different time, and what began as mere curiosity quickly became an obsession with finding out why the letter writer, Marcel Heuzé, had been in Berlin, how his letters came to be on sale in a store halfway around the world, and, most importantly, whether he ever returned to his beloved wife and daughters after the war.

Marcel’s Letters is the incredible story of Carolyn’s increasingly desperate search to uncover the mystery of one man’s fate during WWII, seeking answers across Germany, France, and the United States. Simultaneously, she continues to work on what would become the acclaimed P22 Marcel font, immortalizing the man and his letters that waited almost seventy years to be reunited with his family.

About the author: Carolyn Porter is a graphic designer, typography geek, and founder of the graphic design company Porterfolio. She designed the font P22 Marcel Script, which garnered five awards, including the prestigious Certificate of Typographic Excellence from the New York Type Director’s Club. She lives in White Bear Lake, Minnesota. 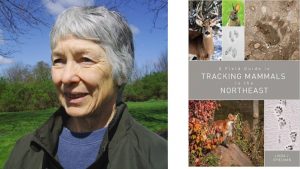 About the book: The ultimate resource for mammal trackers.

As more people come to value the natural world and venture into wildlife areas, a reference to help identify the animals who call these places home has never been more useful. A Field Guide to Tracking Mammals in the Northeast gives you all the details necessary for following animals large and small―from chipmunks and woodchucks to bobcats and black bears. Meticulously drawn illustrations and informative discussions provide the user with an array of tools for identification unmatched in any other tracking book.

This guide also includes thorough discussions of distinguishing features, illustrations of scat, notes on other signs and habitat, measurements for tracks and gaits, and diagrams of characteristic gaits. Lightweight, portable, and comprehensive, this book is an ideal tool for trackers at all levels.

Over 100 pages of black and white illustrations.

About the author: Linda J. Spielman is an environmental educator and leading expert in animal tracking, having studied it for more than 25 years. She coordinates the Ithaca chapter of Keeping Track, Inc. and leads the Ithaca Tracking Club, conducting tracking workshops and outings for trackers of all skill levels. She lives with her partner and dog in upstate New York.

About the book: While the news out of the Muslim world has been focused on the threat of extremism from ISIS and Al Qaeda, a quiet but powerful shift has been taking place among women. In the last 10 years alone, nearly 50 million Muslim women have entered the workforce, arming them with more purchasing and earning power and giving them greater autonomy. Saadia Zahidi, a Senior Director at the World Economic Forum, argues that these profound changes will not only empower women; they will also revolutionize and strengthen the economies of their countries.

Zahidi documents this revolution through the stories of the remarkable women who are at the forefront of this shift, from McDonald’s workers in Pakistan, to middle class software technicians in Egypt, to the heads of global Saudi conglomerates. Zahidi calculates that if female labor participation rose to Western levels, the GDP of many Middle East regions would spike dramatically.

The implications are enormous. As businesses learn how to integrate the new female talent pool, their business models will need to adapt to accommodate their new consumers and their new talent. New businesses are already beginning to emerge that cater to women’s purchasing power, creating new opportunities for female entrepreneurs, and growing the health, education, food, beverage, and retail sectors that are critical to a diversified, stable economy. At the same time, the new economic and social power of women will force the hands of politicians and policymakers who still consider women second class citizens.

Many of these women face a backlash from conservative voices and even members of their families. But because this is an economic revolution, Zahidi argues that it will endure, overcoming cultural mores and forever remaking these societies in ways that we, too, can learn from.

About the author: Saadia Zahidi is a Senior Director at the World Economic Forum, founder of the WEF’s Global Gender Gap Report, and director of its Gender Parity Programme. In 2013 and 2014, she was named one of BBC’s 100 Women driving change in fields covering economics, politics, and society. Zahidi is a frequent commentator and expert on BBC, CNN, Bloomberg, CNBC, Huffington Post, and Fox, and speaks regularly at conferences hosted by the Aspen Institute, the OECD, and the US State Department. Born in Pakistan, she holds a BA from Smith College, an MPhil in International Economics from the Graduate Institute of International Studies, and an MPA from the Harvard Kennedy School.

About the book: From the depths of German and American archives comes a story one soldier never wanted told. The first volunteer killed defending Robert E. Lee’s position in battle was really a German assassin. After fleeing to the United States to escape prosecution for murder, the assassin enlisted in a German company of the Pennsylvania Volunteers in the Mexican-American War and died defending Lee’s battery at the Siege of Veracruz in 1847. Lee wrote a letter home, praising this unnamed fallen volunteer defender. Military records identify him, but none of the Americans knew about his past life of crime.

Before fighting with the Americans, Lee’s defender had assassinated Johann Heinrich Rieber, mayor of Bönnigheim, Germany, in 1835. Rieber’s assassination became 19th-century Germany’s coldest case ever solved by a non–law enforcement professional and the only 19th-century German murder ever solved in the United States. Thirty-seven years later, another suspect in the assassination who had also fled to America found evidence in Washington, D.C., that would clear his own name, and he forwarded it to Germany. The German prosecutor Ernst von Hochstetter corroborated the story and closed the case file in 1872, naming Lee’s defender as Rieber’s murderer.

Relying primarily on German sources, Death of an Assassin tracks the never-before-told story of this German company of Pennsylvania volunteers. It follows both Lee’s and the assassin’s lives until their dramatic encounter in Veracruz and picks up again with the surprising case resolution decades later.

This case also reveals that forensic ballistics―firearm identification through comparison of the striations on a projectile with the rifling in the barrel―is much older than previously thought. History credits Alexandre Laccasagne for inventing forensic ballistics in 1888. But more than 50 years earlier, Eduard Hammer, the magistrate who investigated the Rieber assassination in 1835, used the same technique to eliminate a forester’s rifle as the murder weapon. A firearms technician with state police of Baden-Württemberg tested Hammer’s technique in 2015 and confirmed its efficacy, cementing the argument that Hammer, not Laccasagne, should be considered the father of forensic ballistics.

The roles the volunteer soldier/assassin and Robert E. Lee played at the Siege of Veracruz are part of American history, and the record-breaking, 19th-century cold case is part of German history. For the first time, Death of an Assassin brings the two stories together.

About the author: Ann Marie Ackermann is a former attorney with focuses on criminal and medical law. Eighteen years ago she moved to Bönnigheim, Germany, the town in which the assassination occurred, and is a member of its historical society. Ackermann’s intimate knowledge of the town and of the German language enabled her to bring the German and American sides of this story together. She has a number of academic publications in law, ornithology, and history.