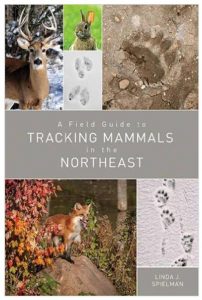 Today I welcome Linda J. Spielman as a guest-blogger. Linda is the author of A Field Guide to Tracking Mammals in the Northeast (Countryman Press/W.W. Norton).

Now that snow is in the forecast, it’s a fabulous time to get outside and start tracking wildlife. Linda Spielman shares her experience of finding bobcat tracks with us. You can enter to win a free copy of her new book at Goodreads.

The thought of snow gets us trackers very excited. As the season advances from fall to winter, snow becomes more and more likely. Early snow usually doesn’t last very long but while it does, it can be a beautiful medium for recording animal tracks. Such was the case several years ago at my camp in the western foothills of the Adirondacks. When I went to bed it was raining but the temperature fell overnight. When I awoke I found several inches of snow overlying an icy layer of frozen rain. 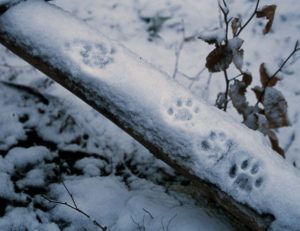 I eagerly headed out to see what I could find. The walking was easy, and the new snow formed a beautiful–but mostly unmarred–white carpet over everything. I climbed a rocky slope and approached an old log landing. Suddenly there in front of me were the most beautiful bobcat tracks I had ever seen. The snow was just cold enough and shallow enough to make perfect molds of the animal’s feet as it explored a jumble of discarded log sections. The bobcat had walked carefully along the logs, occasionally stepping from one to another, always securely balanced and no doubt listening intently for mousy rustlings among the logs. It must not have heard anything because the trail left the log pile and continued across the clearing. As it passed among some thickets and boulders, the trail showed how the bobcat had investigated each feature for signs of possible prey. At one point the bobcat had crested a rocky outcrop and then jumped almost straight down from a height of about six feet to land on a narrow log below. The landing tracks are shown in the photo—the animal had alighted on the icy surface in perfect equilibrium, without a slip or misstep, and then dropped to the ground to continue its ramble. 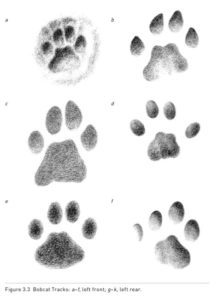 The perfect coordination expressed in those tracks wasn’t the only memorable thing about that morning: finding the trail at all was remarkable. For starters, in the Adirondack region bobcats are less common than coyotes and foxes, and all predators are less common than animals like raccoons, deer, and squirrels. Added to this was the fact that mountainous habitats generally support lower levels of these animals than lowland regions. Bobcat densities where I was were probably between five and ten per 40 square miles, compared to 25 or more per 40 square miles in lowland habitats.

And then there was the timing of it all–I could so easily have found nothing instead of those amazing tracks. If the bobcat had been there earlier, its tracks would have been set in freezing slush and then covered by snow. If I had walked through later in the day the tracks would already have begun to melt in the rising temperatures. Instead our passages were both early in the morning and separated by just an hour or two. Those beautiful and detailed tracks lent wonderful insights into the habits and movements of bobcats. But I treasure even more the vivid sense they gave of this creature which shared the landscape with me.