Do we need quotation marks? Who needs punctuation? Times are a-changing.

Another sign of the changing times is the omission of periods at the end of text messages. Where did all the Oxford commas go? I notice the subtitles on my TV rarely have punctuation and never use quotes. Poets and playwrights are notorious for their disregard of style rules regarding punctuation, especially quotation marks. With instant messaging, even letters are omitted, words shortened: r u, lol, rotfl, omg.

Historically, quotation marks were one of the last types of punctuation to appear, according to David Crystal in his book, Making a Point: The Persnickety Story of English Punctuation (St. Martin’s Press, 2015). In the beginning of the written word, the only spaces between letters came when space ran out at the end of the line. Written words were used to record information, not to be read aloud.

Religious and philosophic communities were the first to want stable texts that could be read, and read in a particular way that would indicate authority and knowledge. Spaces appeared between words, often to indicate reading cadence, breathing and tonal guidelines. Punctuation was a way to give the reader confidence in reading out loud, serving perhaps the same function as a teleprompter does today. Today, writers often abuse the comma as a marker for where the reader takes a pause or a breath instead of an indicator for the grammatical structure of the sentence. 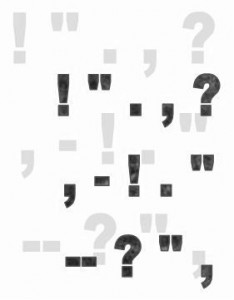 The first punctuation appeared in the 9th Century BC. Quotation marks evolved from commas, turning into double commas in the 1500’s. At first, a single or double quotation mark was used only at the beginning of a speech, or at the beginning of each new line of speech, and eventually to indicate a new speaker. Quotes were first used to refer to something a third person had said or to cite a reference in a non-fiction book. By the end of the 1700’s, quotation marks were used at the beginning and end of words spoken directly by a character. Foreign language quotations were written in italics.

The French have never used quotation marks at all, preferring “guillemet,” a double arrow pointing towards the spoken text, and made into typesetting by Claude Garamond around 1530-40. The dash is also used by French and other Continental authors as a way to signal speech. In a look at 23 new fiction books displayed at my public library, four of them did not use quotation marks. One was an English translation of a French writer, the other three were by new younger authors and their books tended towards literary novels rather than mystery, romance, or science fiction. There is no way to claim there is a new trend towards not using quotation marks in fiction, but this was a higher percentage than I’d expected.

Quotation marks are the least regulated of punctuations marks. They are even considered to be “a convention that falls outside the punctuation hierarchy,” according to David Crystal. 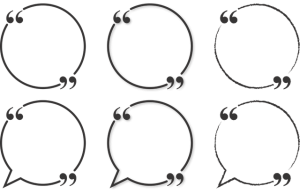 Quotation marks serve several purposes in language: to indicate speech, to indicate you are quoting a previous speaker, to highlight some portion of a sentence, an early placer for the hyperlink. The use of quotation marks now seems optional in fiction. For nonfiction, they remain in steady use to indicate the information is a factual representation of assertions made by authoritative sources.

When I go to the library to look for something new in fiction, I read the first page to see if it is written in a style that draws me in immediately. When I see there are no quotation marks used in the book, I generally replace it on the shelf. I expect that reading it will be a bit of a chore. How will I know who is talking? If I forget where I left off reading, will I have to go way back to figure whose turn it is to speak?

Recently, I saw a new book by Jesse Ball (an oddball and interesting young writer), How to Set a Fire and Why (Pantheon, 2016). I read the blurbs on the back. “A rare and startling work… This is a harrowing, subtle, and absolutely electrifying novel,” – Emily St. John Mandel, author of Station Eleven. I borrowed the book without looking inside. When I got the book home, I discovered there are no quotation marks.

The story drew me in immediately. I liked the main character, a spunky girl who was writing to me about her life. Every once in a while, another person would pop up in conversation but I was only confused a couple of times as to who was speaking.

I ran into a few spots where it was not immediately clear. For example, the main character, Lucia, has been having a silent spat with a man who is giving her a ride in his truck and they stop at a rest-stop:

He went in, got a bottle of water, came out and gave it to me.

In 30 seconds, we’re going to pass by Reva’s Supplies. I’m going to pull into that lot just past that aquarium shop.

There has been a change from the narrator’s voice to the man’s voice, but I had to read it a couple of times to figure it out. But that only happened twice. Meanwhile, the character became my most interesting new friend. 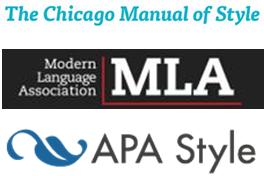 The rules of grammar, spelling, punctuation, and language use are found in Manuals of Style. The three most common ones used for those writing book length manuscripts are Chicago, MLA (Modern Language Association), and APA (American Psychological Association). Your publisher will indicate which Manual of Style to follow and may have an in-house style guide specific to your subject matter or genre to follow in the preparation of your manuscript. If you’re not sure what style to use or want simple answers to grammar and style questions, check on the Purdue Online Writing Lab (OWL). It’s a one-stop site for language mechanics and the three most common style guides.

If the last time you followed a manual of style was your freshmen composition class, then it’s time to revisit the rules. For example, you may have noticed the word “internet” is no longer capitalized. This year the Associated Press changed its rule on capitalization of the internet after the widespread use of lowercase made it impossible to ignore. Chicago style still capitalizes Internet but now prefers web, web page, website, and so forth – with a lowercase w. The most important rule of style is to be consistent. It’s okay to break the rules – for effect. It’s not okay to remain ignorant of the rules. 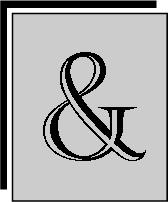 To illustrate how things change over time, take the case of the ampersand. In colonial America, it was the 27th letter of the alphabet and now it is treated as a special character and frowned upon as a poor substitute for the word “and.” Another good example is the number of spaces after a period. If you are still using two spaces after a period, you’re letting everyone know your age is over 60. The rule is one space. With the English language, the style rules continue to evolve and so should you.

As for me, after reading How to Set a Fire and Why, by Jesse Ball, I am no longer intimidated by the lack of quotation marks in fiction anymore. I suspect losing this bias just means there is more good literature for me to read!