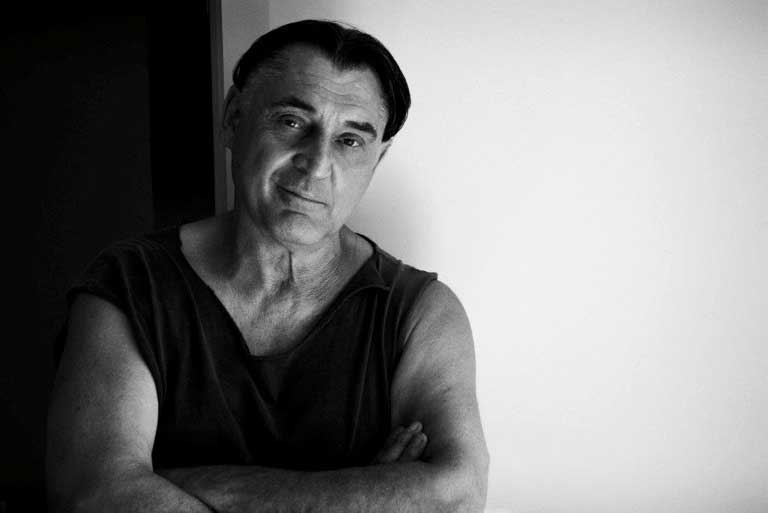 Mauro Marinelli is an artist, photographer, author, contractor, and one-time novitiate based in New York. Kehrer Verlag publishes his second book of art photography, Under Old Stars: Wanderings in Italian Hill Towns in the fall, and an exhibition with prints from the book will open on September 22 at the American Italian Cultural Center in New Orleans. I had the pleasure of interviewing Mauro and learning what went on behind the camera as he created this project. 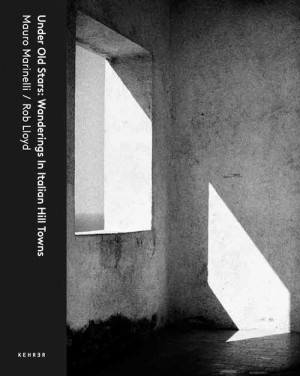 SK: What was your inspiration for Under Old Stars: Wanderings in Italian Hill Towns?

MM: I was sitting at the dining room with my family having a big Italian dinner when I asked my Uncle Peter what he dreamt of. “I dream of Italy when I was a boy,” he said. And I thought, wow, what a great subject. I went to Italy with that in mind. I found my uncle’s dreamscape, in these little hill towns with three or four hundred people, where things were still kind of untouched by time. These towns were so small, they didn’t even have a Pensionne. I would have to find the priest in these towns and explain what I wanted to do. He would then take me to someone he knew and vouch for me so I could rent a room in their house. You know, that takes trust. There’s a lot of trust in those towns, and I think much of that trust lives in these photos I’ve taken. There’s one picture of a man closing his eyes that reminds me of the responsibility of taking someone’s picture. People don’t like having their picture taken because they’re afraid it will reveal what they don’t want others to see. To have a stranger be that vulnerable while allowing me to take their picture, well, it’s just incredible and a privilege.

SK: Describe the ways you worked together with writer Rob Lloyd on this book. How did you weave the words and images together?

MM: I had read Wanderings by Hermann Hesse. It’s one of my favorite books even though it’s not very well known. Hesse walked from Switzerland to Austria and made pencil sketches of what he saw. He also wrote prose pieces to accompany his sketches, and I thought that was beautiful concept. Rob Lloyd and I went to these Italian hill towns together with this structure in mind. The words and images reflect and build on each other but neither directly illustrates or captions the other. It is an ambitious project and a unique format for a photo book.

SK: How has being an art photographer changed the way you look at the world?

MM: Well you know a box of film is kind of like Pandora’s Box. Once you start seeing the world and its potential in terms of possible photos that’s all you see. Whenever I see a beam of light, I try to envision how to capture it and the moment it lives in. Mind you, this will happen with or without a camera. A beam of light on the wall will pull me in, and I’ll need to take a picture. As a photographer, you become a slave to the light, really!

SK: When did you decide you wanted to be a photographer? 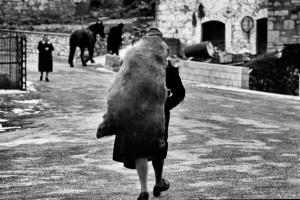 SK: Which photographers influenced you when you began to take pictures?

MM: My mentor Sean Kernan was a huge influence for me. His assignments were eclectic and complex and that helped prepare me for my later projects such as Under Old Stars. Ralph Gibson also taught me not to necessarily look at photos but paintings for inspiration. Painters have been looking at perspective far longer than photographers. This is why I’m drawn to Edward Hopper. His painting Seaside Rooms actually inspired the cover of Under Old Stars.

SK: What three writers, living or dead, would you like to have dinner with?

MM: Definitely Salinger, and I love T.S. Eliot so I’d invite him, too. And I know he’s not a writer, but I would have to sit down with Edward Hopper, whose paintings have spoken to me from the very beginning.

SK: Do you have a favorite photograph you’ve taken?

MM: Honestly the cover of Under Old Stars is my favorite. I had been looking – for that beam of light for a long time. What a blessing to have found it.

SK: What motivates you to take a photograph?

MM: Light and graphics. I have a strong sense of the graphic possibilities of the shot before I take it, and I’m always attracted to the subtleties of light. The shot has nothing to do with the camera, it’s about understanding the light. A good photographer is always a good technician, but a good technician isn’t always a good photographer. I remember that whenever I’m setting up a shot. You can be great at all the technological aspects of photography, but if there’s no feeling in the shot then the photo is worthless. Ralph Gibson would always tell me I needed to respect the hundreds and thousands of people whose effort  went into making the machine (the camera) in your hands and the picture you’re about to take. 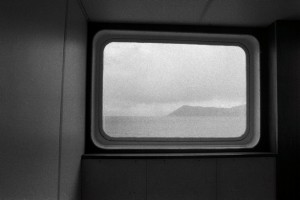 SK: There are images of passageways—doorways, gates, windows, a view of the mountain between sheets pinned to a clothesline—without any people in the picture. Why do you give these spaces emphasis?

MM: I wanted to stay true to the unwritten premise of my uncle’s dreamscape. The images were meant to capture the waking memory and glimpses of his dream world.

SK: What are your three favorite movies?

MM: The Hours, for sure. I love the Philip Glass soundtrack in that movie, and I like the way the story and characters are woven through time. True Romance is on my list for the same interweaving of the characters’ lives together. And of course, Goodfellows. There’s an authenticity to the film that reminds me of how I grew up.

SK: If you were to return today to those Italian hill towns, what camera would you take? And why? 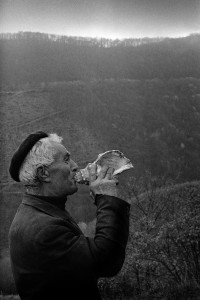 MM: I used film for Under Old Stars because I wanted the grain. Now, of course, I would probably shoot digitally. It would be like watching a movie for the second time, I’d be able to catch all the little things I missed the first time around.

SK: This is the second book you’ve published with Kehrer Verlag. Are you working on a third? If so, will you tell us its subject?

MM: My next book will be titled Five Disciplines. There will be five groups of fifteen photographs each focusing on a different discipline, such as portraits, nudes, light, road, and nebulae. Nebulae will be focused on images that are nebulous in tone or feeling, and that category will be the only one in color.

In the pre-dawn hours of February 18, 1942, three American warships zigzagged in convoy along the south coast of Newfoundland. Caught in a raging blizzard, the three ships ran aground on one of the most inhospitable stretches of coastline in the world—less than three miles apart, within eight minutes of each other. The Wilkes freed herself. The Truxton and Pollux could not. Fighting frigid temperatures, wild surf, and a heavy oil slick, a few sailors, through ingenuity and sheer grit, managed to gain shore—only to be stranded under cliffs some 200 feet high. From there, local miners mounted an arduous rescue mission. In Hard Aground, based on END_OF_DOCUMENT_TOKEN_TO_BE_REPLACED

One thought on “Q & A With Mauro Marinelli”