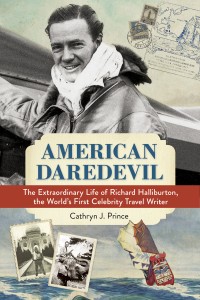 More than 75 years ago, Richard Halliburton set sail in a Chinese junk, “The Sea Dragon,” hoping to arrive in time for the San Francisco Golden Gate International Expo. Instead, he vanished without a trace when his craft sank in March 1939.

Halliburton had been a household name since 1930, known for his bestselling books published by Bobbs-Merrill. The first biography written about this nearly forgotten celebrity in American history has recently been published (June 1, Chicago Review Press). American Daredevil:  The Extraordinary Life of Richard Halliburton, the World’s First Celebrity Travel Writer by Cathryn J. Prince. It retrieves from oblivion the story of this globetrotting guide who inspired Americans to explore the world after World War I.

As an adventure journalist, he did more than write the headlines. He made them. Halliburton orchestrated media spectacle. Chronicling his escapades around the globe, Halliburton gave adventure a handsome face. He climbed the Matterhorn, swam across the Panama Canal, took a dip in the reflecting pool at the Taj Mahal, got himself arrested on the Rock of Gibraltar, and flew a two-seater airplane he named the “Flying Carpet” to Timbuktu. Halliburton’s first book, The Royal Road to Romance, reflected his philosophy of living life to its fullest. Swash-buckling good looks and a charismatic personality, Richard Halliburton took America by storm as a romantic hero. Adored by women, and especially popular on the women’s book club circuit, his personal path veered in the opposite direction from marriage.

When he graduated from Princeton University in 1921, he travelled to Europe and adopted a vagabond daredevil persona. Far from his Memphis home and his father’s insistence he find a suitable girl to marry, the most eligible bachelor Richard Halliburton discovered his homosexuality with a fellow American traveler. It was the first of several relationships he kept separate from his persona as a celebrity. As the era of social and sexual openness came to an end and began to constrict toward social conservatism in the mid-1930s, Halliburton found himself burnishing a hyper-masculine version of himself to the public. He and his editor, photojournalist, and partner, Paul Mooney embellished his writings with entirely fabricated female love interests.

Cathryn Prince brings Halliburton’s biography to life with her rich description based on extensive research and archival visits. The production value of the book itself, published by Chicago Review Press, is exceptionally high and worthy of note. The hardback edition has a heavy dust-jacket with beautiful cover art. Inside they’ve incorporated black and white photographs into the body of the narrative text. This is what I like to hold in my hands when I read a great book. Halliburton’s adventures are fascinating to contemplate in this era of global communications and international travel. 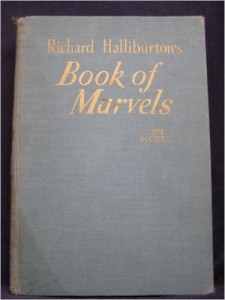 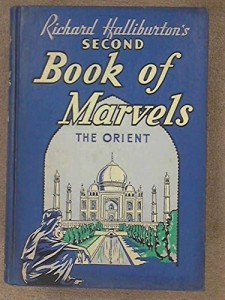 This book might not have been written before the Obergefell decision by the Supreme Court, but it makes for an interesting historical counterpoint to the rapidly changing cultural definitions of family and marriage. A century ago, Richard Halliburton’s public profile required a heterosexual emphasis and he became the darling of the ladies and young lads. Every youngster in America read his two Book of Marvels (Occident, and Orient) during the late 1930s. He lusted after fame and fortune and found himself caught in the crosshairs of cultural wars on a personal battlefield. When Richard and Paul sailed eastward from Hong Kong they encountered a typhoon and their bodies were never found. This story should not be forgotten.

No spoiler here. I won’t disclose the evidence on what happened during Halliburton’s final voyage to the bottom of the ocean here based on original interviews with the college boys who had signed on to crew his last adventure. You’ll want to read this book. It’s a delicious romp through the early 20th century history of journalism, books, publishing, and travel. This is the kind of narrative nonfiction history that makes the past new again.

In the pre-dawn hours of February 18, 1942, three American warships zigzagged in convoy along the south coast of Newfoundland. Caught in a raging blizzard, the three ships ran aground on one of the most inhospitable stretches of coastline in the world—less than three miles apart, within eight minutes of each other. The Wilkes freed herself. The Truxton and Pollux could not. Fighting frigid temperatures, wild surf, and a heavy oil slick, a few sailors, through ingenuity and sheer grit, managed to gain shore—only to be stranded under cliffs some 200 feet high. From there, local miners mounted an arduous rescue mission. In Hard Aground, based on END_OF_DOCUMENT_TOKEN_TO_BE_REPLACED