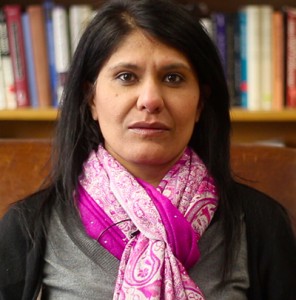 President Barack Obama made a surprise visit to Afghanistan. Bowe Bergdahl was released. And Mariam Raqib arrived in Kabul on a return peace mission. This is a critical moment in the history of US-Afghan relations in many respects. Peace proves elusive.

In a recent article for The Christian Science Monitor, Cathryn Prince interviewed Mariam Raqib, who left Afghanistan with her family as a child in the 1980s during the Soviet occupation. She attended Wells College in upstate New York and eventually returned to her homeland almost 20 years later to a place she could not recognize from her childhood memories of lush gardens, fruit and nut trees. Years of conflict have led to the eradication of farms and forests – 60 to 80 percent of the country’s land resources – and created severe environmental degradation of the land, forests, and irrigation systems.

In response to what she saw, Raqib started Afghanistan Samsortya, a nonprofit organization dedicated to ending environmental degradation in Eastern Afghanistan and protecting the natural resources there. Samsortya is a Pashtu word meaning revitalization, and the organization is dedicated to revitalizing Afghanistan to its former natural abundance. through its projects. Along with developing nurseries, introducing new species of trees that provide a food source, and repopulating deforested regions, the organization also teaches people how to care for trees, giving the project a community-driven and sustainable approach.

Mariam Raqib is currently traveling inside Afghanistan expanding the organization’s tree nurseries. A donation of $15 provides a family with a fruit tree and training. It costs $1,000 to plant 100 trees which provide shade and nourishment. Rabiq is currently working on her memoir tentatively titled,  Trees Are the Lungs of the Earth: My Afghanistan.