Have you ever disagreed with someone (friend, family member, stranger, bookseller) about a book? Have you ever hotly argued over the quality, or lack thereof, of one?

No way! You couldn’t possibly love Freedom! What do you mean it’s a must-read? You say you couldn’t put it down? I loathed picking it up! It was awful! The characters aren’t likable, the ending sucked, and the whole thing is pretentious. How can you love that book?

Okay, maybe not that specific argument. (NB: I haven’t read Freedom. Sorry, Emperor Franzen. Please don’t trash me on Twitter.) But perhaps you have argued over a popular novel and couldn’t possibly understand how your opinion could be so vehemently rejected. I have been (and still am) in total disbelief when anyone tells me they dislike Harry Potter or The Hunger Games. When a friend reveals this, I become even more argumentative: but I know and like you! We should like the same things!

To dislike reading a book is not the same as to dislike a book. What if the reading experience is a struggle but, in spite of the challenge, the book is good? I dislike reading Shakespeare because I don’t speak 16th century English and I prefer to read a language I speak (colloquial, 21st century American English). Reading Macbeth in college was not a pleasurable experience for me for this precise reason. However, Shakespeare is good, and he is good because his works follow rules of craft (character development, pacing, structure, etc) in addition to defying or modifying these rules, thereby establishing a new tradition in literature.

Ah, but what if the reading experience is pleasurable and the book is bad? I often enjoy a reading experience because the text is easy to follow or the plot and resolution are apparent, but the book itself is not well-written. There are glaring, distracting, noisy flaws that pull me out of the story. I’m bored, disinterested, and too aware of my actions. I’m aware of my eyes following lines across a page, tilting my head down to the right, turning a page, and shifting my gaze to the top left to start all over again. And even when I cannot pinpoint a book’s flaws, this state leads me to perform a bit of psychological transference. I feel wrong so the book feels wrong. The inevitable consequence of such transference emerges and I feel deceived and cheated; after all, I picked up the book for a reason. No one wants to feel time and effort wasted on reading, even a book as wretched as the one just completed. So it is the case that, in spite of an initial interest, reading a bad book is an uncomfortable experience. I can’t help but wonder, who edited this and how did these errors pass inspection? And when I find myself explaining to others (especially ones in disagreement) why the book is bad I sound like an idiot because it’s hard to expose flaws to someone who is blind to them. So I reduce: the book just wasn’t right.

Unfortunately, I possess a cruel internal drive which prevents me from setting a book aside. Unlike others who stop reading after a few pages because it is bad, I cannot give up on the book even if it takes weeks, months, even years. It breaks my heart. Someone, somewhere, wrote this book and someone else, somewhere, decided it was suitable to publish (see how self-publishing changes things for me?). So I push on, but the feeling does not shake. The book doesn’t get better. I can’t shake the feeling: this book sucks.

Being attuned to the book industry, however, means that I am aware of many good books and often struggle to manage my TBR list, doubling and tripling in size each season. Word of mouth, of course, is the best indicator of good literature. Shelf discovery, those long meanderings through aisles of towering bookcases in a nearby local bookstore, is noteworthy too. And yet as I work my way into the publishing industry, reading industry newsletters and blogs and even following popular Twitter accounts, more and more books that I read are not good. I fear this is a strange counter-culture knee jerk – the selfish desire to read an absolutely wonderful book that no one else has read or heard of. And thus the paradox, the root of my troubles: if no one is reading this book or talking about it, you can bet there’s a reason. Especially when publishers, agents and booksellers are reading and sharing the same 5-10 books a season.

And so it was, armed with this implausible hope, that I downloaded a NetGalley copy of The Whipping Club (T.S. Poetry Press, 2012) by Deborah Henry to my e-reader, a Nook Simple Touch. The advance copy was available to anyone on NetGalley who requested it (this should have been a flag) and the publisher was one I didn’t recognize (another flag). But the synopsis drew me in and the setting was Ireland, so I couldn’t resist. 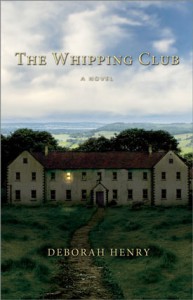 When Catholic Marian McKeever discovers that she is pregnant before she weds Jewish Ben Ellis, she is coerced to abandon the illegitimate child, fearing greater objections from their families than interfaith. And though she and Ben wed the next year and have a daughter soon after, Marian has never been able to assuage her guilt. So when 11 years later Marian learns her firstborn child is a ward of the Irish state, abused and malnourished in a local orphanage, she is compelled to atone for her sins. Marian and Ben must confront their troubled past and reveal their darkest secrets if they are going to fight through the red tape – passive legal systems and trenchant religious institutions – to bring him back home.

I opened The Whipping Club on my e-reader, expecting a compelling and powerful story, and immediately all my hopes were dashed. The book was a PDF file, not an e-pub. As a result, all text had strange formatting with every few phrases or sentences alternating font styles and sizes. Someone working for Deborah Henry – or perhaps Henry herself – made a significant mistake.

Then I chastised myself: if the story is good, the formatting errors won’t matter. I even went online as a precaution to see what people on GoodReads had to say. But despite encouragement from fellow readers on GoodReads and promises that this novel was “gripping” and “unputdownable,” my reading experience did not improve. I finished the novel and I was disappointed. I felt duped by the book’s praises and endorsements.

Yes, this was a story of “love and survival.” No, it was not “powerful.” Yes, the themes are complex and “multilayered.” No, Henry’s prose is not “engaging” or “poetic” and her dialogue is not “seamless.” Marian was underdeveloped, a character plagued by too much internal dialogue and not enough action. There were too many perspectives, the novel unfolding to include Ben’s, Adrian’s, Nurse’s, Father Ryder’s, and Father Brennan’s perspectives (and that’s not a comprehensive list). Nearly all the characters contributed to the drama and the effect was akin to a deformed and abandoned jigsaw puzzle. Though Henry’s concept was good, the novel needed developmental editing. The greatest compliment I can offer is Henry delivered an honest, balanced, non-reductive portrait of Catholic Ireland in the 1960s (and Jewish Ireland, for that matter) and the challenges faced by many individuals during that historical moment.

This debut novel sounds intriguing – absolutely – but the execution was poor and the story unpolished. A concept is rarely powerful enough to overtake such major flaws in craft. It is sad but true, and most writers’ deceive themselves thinking that they are gifted enough write a bestseller when they are also deaf to editorial input and derisive of experience.

The Whipping Club’s premise is complex, political and emotionally-charged. This was a book I should like and enjoy, especially given the professional book cover design. Ah, but what is that aphorism? Oh yes, don’t judge a book…