Journalistic nonfiction makes an unspoken promise to readers: it doesn’t just tell a tremendous story, it forces readers to question and examine current cultural practices and societal values. A strong journalist knows how to write articles that do more than just expose the facts. Many call it an ethical code, but I call it a mark of skill, developed over the years by knowledge of craft and lots of experience. Making a strong case for both of these claims, quirky journalist and self-proclaimed humorist Jon Ronson exposes more than just the facts in The Psychopath Test: A Journey through the Madness Industry (Riverhead, 2011). With two titles under his belt (Men Who Stare at Goats and Them Adventures with Extremists) and a curiosity that might just get him killed, Jon Ronson delivers on the unspoken promise. 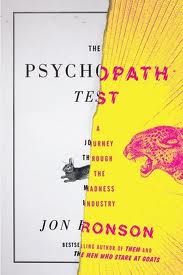 After a series of curious events involving an excursion to Europe and a mysterious manuscript, Ronson sets out to explore insanity. He wants to know how insanity is determined and why some people are considered more or less insane than others. More specifically, he strives to answer a question: what makes someone a psychopath? Why is it that some people – Wall Street business executives, for example – are considered “driven” and “motivated”, while others – a young man in Broadmoor, a high security psychiatric facility, who claims he feigned mental illness – are considered “psychopaths”?

At its heart, The Psychopath Test questions the authenticity of labels – those which others give us and those which we give ourselves. When we worry about behaving abnormally and feeling “crazy” or “mad”, are we contributing to the social disease – this overuse of labeling, categorizing, and diagnosing?

And the general public loves reading about eccentrics. So it is delightfully suitable that Ronson is a bit of an eccentric himself, which is what makes his voice and humor so endearing to the reader. As begins his journey through the madness industry, meeting psychologists and neurologists to figure out precisely what makes someone a psychopath, Ronson bares his neuroses to the reader and sets us up to consider our own. In a fit of anxiety, he searches WebMD for a preliminary diagnosis, wondering if he exhibits signs of mental illness like the patients he has been interviewing. In order to locate the source of his anxiety, Ronson must reduce specific behaviors and life circumstances down to selectable symptoms and factors for disorder and disease. The greatest implication of Ronson’s self-examination via the Internet is how psychology is being reduced to a business of conformity: serving up the crazy people to show the public what they shouldn’t be like. Think The Jerry Springer Show, Maury, Cops – and in more recent years, Hoarders and Alcatraz.

“Practically every prime-time program is populated by people who are just the right sort of mad, and I knew what the formula was. The right sort of mad are people who are a bit madder than we fear we’re becoming, and in a recognizable way. We might be anxious but we aren’t as anxious as they are…. We are entertained by them, and comforted that we’re not as mad as they are.”

Gauging psychopathy has been reduced to a calculated number of factors, a subjective scoring system that is widely accepted in psychiatry in spite of the assessment’s controversial and unreliable science. Circumstance, it turns out, determines much more of madness than hard science because our society knows so little about the human brain and the source of human behavior. Ronson becomes certified in the Hare Checklist, the reigning guide in evaluating psychopaths since the mid-70s. He meets with Robert Hare, its creator, to interview him about the Checklist and discovers that they share the same concerns about the future of psychology and mental health diagnostics today. Where is the line and can any of us – especially journalists and mental health professionals, worries Jon Ronson – see and distinguish it?

Even more worrisome, Ronson questions whether diagnoses are affected by socioeconomic circumstances. Hare Checklist factors listed under “juvenile delinquency” – abusive parents or siblings, early promiscuity, frequent unauthorized absences from school, defiance of authority figures, among others – strongly inform diagnoses of psychopathy in adults. But how many of us adults can cite some of these same factors in our own childhoods? Is it fair for crappy childhood circumstances to tip the scales toward madness when adult behaviors are the subject of assessment?

“I wondered if sometimes the difference between a psychopath in Broadmoor and a psychopath on Wall Street was the luck of being born into a stable, rich family.”

Take the case of Rhinotillexomania, a nose-picking disorder. It sounds like it shouldn’t be a disorder, right? That is, until you read the DSM-IV classification which explains that individuals diagnosed with Rhinotillexomania pick their noses until their facial bones are exposed. Since it falls under the category of self-harm, it deserves to be included in the DSM-IV. It is a compulsion, dialed up high, crossed over past the line of healthy human behavior. But how about Child Bipolar, Autism, or Attention Deficit Disorder? Are these genuine disorders that require a medical diagnosis and regimented medication? How do we separate erratic behavior from that which may cause us and others harm?

Ronson leaves readers with more questions than answers and explores arguments from both sides in a relatively balanced, unbiased way. As all journalists ought. The final chapters of The Psychopath Test, though, send a clear warning – a whisper of Ronson’s own opinion on the matter – to readers: what is stopping the madness industry itself from going mad?