My first forays into used book buying were with my dad at the venerable Holmes Book Company on 14th Street in Oakland, California. Built in 1924, the store was spacious but dark with unpainted wood everywhere—floors, stairs, display cases, shelves—like Fezziwig’s warehouse crammed with books. My dad, who was a purveyor of used technical books, manuals, teach-yourself-books, and textbooks, loved Holmes, and so we went whenever the urge bit him.

I discovered Half Price Books when I first moved to Austin in 1985. Established in 1972 in Dallas, Texas, Half Price Books now has 116 stores in 16 states. Gifts, albums, new and used books, rare books, and bargains—they’ve got it all. And, oh rapture, oh joy, their entire stock is inventoried. Unlike other used book outlets, at Half Price Books, you tell the clerk what you’re looking for, and the clerk tells you if it’s in stock. 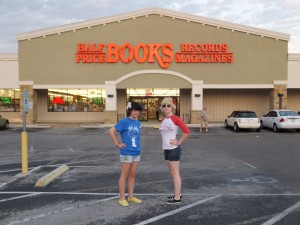 Since my return to Austin in 2010, I discovered Recycled Reads, an outlet store for the Austin Public Library. Books that have been removed from the library’s holdings as well as donated books stock this store where hardcovers and softcovers sell in the $1-3 range. Like Half Price Books, they carry record albums and rare books. However, the store’s primary purpose is to keep discarded titles out of landfill. What doesn’t sell gets carted off to Dallas for recycling. According to their website, Recycled Reads handles 10-12 tons monthly of obsolete media, including plastics from audio and video cassettes, CDs and DVDs. Got media junk? Bring it to Recycled Reads for responsible, environmentally-sensitive disposal. 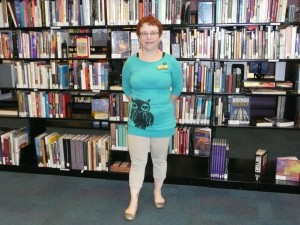 Obviously, there’s no greater deal than free, which is why the cheap person’s book store of choice is no store at all, but the local library. Still, there are occasions in one’s life when borrowed won’t do, or when walking into the library without a specific title or topic in mind leads only to frustration. Better to have one’s choices limited so that one can make a choice. Enter your local dollar store.

God bless the 99 Cents Only Store. Some of my best book buys have come from there. Don’t laugh. I have hardcover books by Pulitzer Prize-winning authors that I got for a buck: A Magnificent Catastrophe (Free Press, 2007) by Edward J. Larson and Into the West (Athenium, 2006) by James McPherson. The retail price on the former is $27.00 and on the latter, $22.95. Into the West is a children’s picture book that covers reconstruction to the final days of the frontier. At $1 each, I had to buy 10 copies—one for my kids, one for each 5th grade class at their elementary school, one for the school library, one for the public library, and a few more for gifts.

I have had to bid adieu to the 99 Cents Only Store, of which there are none in Austin, but I’m not sad. My book shelves remain stocked with great buys and great reads. Now if I only had more time to read . . . .

Do you have a favorite cheap reads outlet? When you need to find a reader’s real deal, where do you go? Let us know.