The mission opens with a good-bye and closes with a hello. The Photographer: Into War-Torn Afghanistan with Doctors Without Borders (First Second, 2009) opens with our protagonist leaving Paris to do a photo-reportage mission of a MSF (Médicins San Frontières, or Doctors without Borders) caravan that’s going into northeastern Afghanistan, near the city of Feyzabad. Starting with them in Peshawar, Pakistan he will cross fifteen mountain passes over 16,000 feet high, on foot through a country at war. On one side, invading Soviet forces and the army of the Communist government in Kabul. On the other, the Mujahideen, the Afghan resistance. In the middle, explains our protagonist, are the humanitarian organizations – the MSF.

With the decade-long anniversary of 9/11 behind us, I thought it suitable to examine a bit of United States and World History of which people of my generation have no awareness or perception. Being a student – and a very young one at that! – when the Twin Towers fell, I was provided with little historical context or rationale to this major national catastrophe. The act of terror was explained away in the following months by finger-pointing and summary religious dogma. I am not ashamed to say that The Photographer provided me with an education that my educators never proffered. This is not to say that my education was poor; in fact, the opposite. Certain key events and details were not explained, whether they were deemed irrelevant or too complex. Perhaps in the wake of 9/11, as people tried to move on and, in the activity of repairing one’s life, looked towards the future, they forgot how and why the past came rushing forwards to meet us. To move on from the past does not mean forgetting it.

The Photographer’s introduction outlines in very broad terms the situation in Afghanistan, United States and Russia during a key turning point in the Cold War. Before the rise of the Taliban and the founding of Al-Qaeda and long, long before a man called Bush, Jr. learns of an aerial attack on the World Trade Centers and the Pentagon and launches a so-called “War on Terror”. The book closes with updates on the status of its characters: where they have gone since the mission, what they are doing, and where you might find them to this day. The middle, the heart of the novel, is the experience crossing into Afghanistan by night to avoid Soviet detection, the bribery and protection bartered by the MSF to ensure safe passage of their doctors and their equipment, the high cost of human error in war territory, and – most of all – the people who suffer and those who try to ease it, if not wholly erase it. Religion is not a factor in this story. The locals have their beliefs and their practices which, for the most part, the MSF and our narrator respect… until local medicinal practices come in to play and irreparable damage is done.

This story is curious and hard to categorize, especially for graphica. Often hesitant to tackle serious world events given its history of light (let’s call it boyish) fiction, graphica of late has proven itself a suitable medium and genre for nonfiction narrative. While there is a precedent, owing to graphic novels like Art Spiegelman’s Maus series and Marjane Sartrapi’s Persepolis, when one thinks of graphica it is hard to think of anything but fantasy, action, adventure along the lines of Superman, The Runaways or Sin City. Even romantic gestures in the genre, like Craig Thompson’s Blankets, seem to be exceptions to the rule rather than alternatives. The Photographer, if little else, does its predecessors’ justice and provides an argument for the value of graphic narrative as expressions of emotionally challenging or violent material.

In a mode that I found quite refreshing and unique, The Photographer is composed of photographs and then supplemented by drawings where necessary. The effect is bizarre and unsettling at first, but then the double vision (or representation) offers a perspective that otherwise would be lost. Through the photographs, the reader sees what the narrator sees. What is drawn is what he cannot see well, or cannot show the reader, or are snippets of time simply lost. The effect is more honest, more authoritative. It’s hard to argue with a photograph, especially one taken before certain advances in modern technology like Photoshop. Though the drawings are crude – I found it tough to differentiate between all characters in the narrative, especially members of the MSF (excepting Juliette, the only female) – the style reinforces the realities of the mission’s expedition. Lots of the experience in Afghanistan is crude and basic. There are no sterile waiting rooms, no impressive laboratory equipment for running tests, and certainly no expensive medications the likes Americans receive in state-funded hospitals. There is just the open air, basic sterilization and operating tools, and minimal lamplight for which to examine an un-ending stream or bruised, battered, and mangled patients.

A patient I found most heartbreaking of them all? A young girl who will never walk again because her spinal cord was severed by a piece of shrapnel no larger than a freckle. Don’t get me started on the others because there are too many. Children are the cruelest causalities of war; you don’t have to be a parent to understand this statement or agree with it. 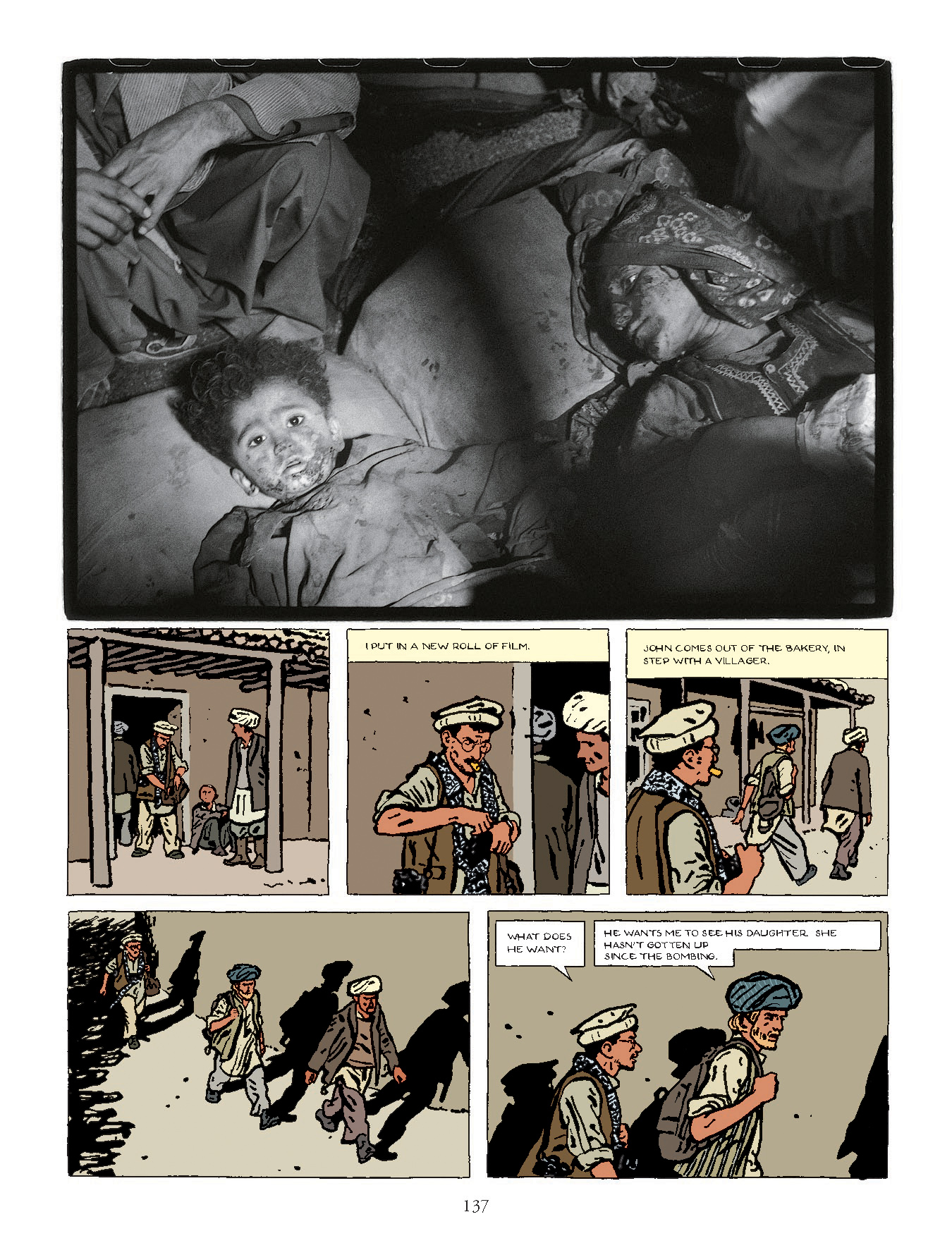 Perhaps in a nod to its humanitarian origins, The Photographer is a collaborative effort. Didier Lefevre, the photojournalist who joins Doctors without Borders, collaborates with friend and cartoonist Emmanuel Guibert and designer Frederic Lemercier. Together the three create a stunning work of graphica that delves deep into war-torn Afghanistan in the late 1980s and follows a peace-keeping mission as they try to mend at an individual level what others are trying to destroy on a national one. It is a sad story but not one without hope.

Though Lefevre suffers much on his journey through Afghanistan, he also recognizes a deep desire to return. To document the Afghan life and varied lifestyles. To revisit the kind, warm people he met along the way. To share the efforts and exploits of the MSF, individuals who work harder than any other living being to perform such selfless and lifesaving acts. To give a voice to local farmers and traders who live with war but don’t have an opportunity to share or document their experience of it. For many of the men and women he met in Afghanistan, Lefevre was the first photographer they had met; the only person to have taken their photograph and they will never see it. His journey was dangerous, sure – it nearly cost Lefevre his life upon returning to Paris with chronic furunculosis – but he’d do it again.

In the pre-dawn hours of February 18, 1942, three American warships zigzagged in convoy along the south coast of Newfoundland. Caught in a raging blizzard, the three ships ran aground on one of the most inhospitable stretches of coastline in the world—less than three miles apart, within eight minutes of each other. The Wilkes freed herself. The Truxton and Pollux could not. Fighting frigid temperatures, wild surf, and a heavy oil slick, a few sailors, through ingenuity and sheer grit, managed to gain shore—only to be stranded under cliffs some 200 feet high. From there, local miners mounted an arduous rescue mission. In Hard Aground, based on END_OF_DOCUMENT_TOKEN_TO_BE_REPLACED