I finally went to BookPeople—Austin’s fav indie bookstore—because Tom Angelberger was signing his boy-friendly graphic novels, The Strange Case of Origami Yoda and Darth Paper Strikes Back. As George Plunkitt so aptly stated, “I seen my opportunities and I took ’em,” by grabbing my 10-year-old, Jacob, saying, “Let’s go to the bookstore.” Angelberger’s presentation was lots of fun—juggling, inter-acting with the audience, re-telling a chapter from the book. Darth Paper is his new release, which, of course, we had to buy. We brought our own copy of Origami Yoda, so now Jacob has two signed Angelberger books, and I have some snapshots of my kid with the author. 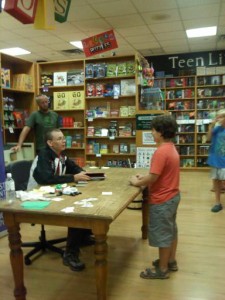 Local, small chain pizzeria, Austin’s Pizza, passed out free pizza at the signing. In the indie biz, it’s one hand washing the other. You promote me, I promote you. Win/win/win. The third win was me getting my kid out to a bookstore where he happened to bump into a couple of friends from public school who happen to be the rabbi’s kids. And if my kid has eyes for the rabbi’s daughter, that’s just fine with me. 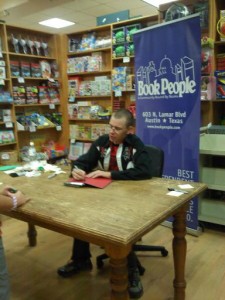 Tom Angelberger at BookPeople in Austin

BookPeople has been around since 1970. It has been voted best bookstore in Austin for over 15 years, and was voted Bookstore of the Year by Publisher’s Weekly in 2005. The store is drop-dead gorgeous. As elegant as any high-end Barnes & Noble without all the B.S. cookbooks and coffee table books that people collect, but never read. By the way, BookPeople is next door to REI, across the street from Waterloo Records, and around the corner from Whole Foods Market. Marketing synergy, ya think?

Anyway . . . there must be a huge market for more books like Angelberger’s. Of course, we’ve all seen the Wimpy Kid series hit the big screen. Jacob loved those books (we have all five) as well as the Captain Underpants series. Boys love and need goofy, gross-out, shlemiel humor. There’s not enough of it in print to go around. Ah, that mob of scribbling women has flooded the market with girl-friendly, chick-flick stuff. Gotta get those men—who haven’t lost touch with their inner-boy—to write more books for kids.

A week after the Angelberger event, I went back to BookPeople for Dr. James Pennebaker’s signing of his new book, The Secret Life of Pronouns. This time I brought along our 13-year-old, Francine, to see both the store and an intellectual community gathered to listen to an author—something she didn’t see much of during her first 12 years in Los Angeles! Francine found three novels she wanted to buy, but I narrowed her choices to one. In short, it was a successful outing.

Bring ‘em on, BookPeople! We’ll be back.