Guantanamo Boy (Albert Whitman, 2011 reprint) is the story of a teenager in the wrong place at the wrong time in a dangerous political climate. It’s a story of closed ears, fearful eyes and silent mouths. A story in which the small kindnesses buried deep in the heart have the power to keep a person alive, like the power of a good book (a Reader’s Digest copy of To Kill A Mockingbird read over and over again) or a piece of chocolate. Perera doesn’t just explore the fragility of individual rights but the fragility of the human soul. Her protagonist is the most innocent of them all, a mere child.

Though Khalid knows there’s a war on and has heard stories of Muslims suddenly disappearing, he can’t believe that any of it could happen to anyone he knows, much less happen directly to him. His outlook mimics our own post-9/11 cultural shock. War? What war? Not here, not in our backyard. After all, Khalid is just a teenage boy from England so why should he be concerned? He likes to hang out with his friends, play computer games and follow the Rochdale soccer team. He wishes he had the nerve to talk to pretty girls, or one particular classmate named Niamh. Khalid didn’t even want to go with his family to Pakistan and help his aunties move house. He wanted to stay home and play the computer game his cousin Tariq developed. He doesn’t speak Arabic or perform the traditional calls to prayer; he feels no affiliation to his native and familial religion aside from occasional Friday prayers at dinner. If Khalid wasn’t Muslim, the injustices and cruelty which quickly confront him… wouldn’t have happened. There would be no story of torture and survival to tell. But because Khalid got caught in a crowd during a protest in Karachi and wore the wrong clothing, he’s stolen from his family in the middle of the night and taken without charge to Guantanamo Bay. Author Anna Perera makes one thing clear with this novel: no person should suffer what her fictional character experiences in, and getting to, Guantanamo. But plenty do and it’s not a tragic work of fiction that children like Khalid suffered in the ways that Perera has researched and imagined. Though the numbers are disputed, several children have been locked up and tortured at Guantanamo Bay like dangerous terrorists and enemy informants.

Khalid’s experiences in Guantanamo, from start to finish, are astonishing. The possibility of reality – of his fictional experience based on a true, lived experience – is terrifying. How could anyone allow it to happen? Not just to an adult, but to a child! Remember all those news reports on water-boarding that sickened and disturbed us from the comfort of our couches? Rated as highly graphic on CNN and censored on the evening news? Watch any documentary exposé from the last five years and you can’t help but wonder how any rational soldier could abide by and utilize such interrogation practices. When Khalid experiences it – when Perera writes it – I had to put the story down. My stomach was cramped, my head dizzy. Enough, my body said. And yet I had to pick up the book and finish the story. I had to find out what happens because it couldn’t possibly be real. Because Khalid ought to be preparing for college entrance exams and asking Niamh out, not sitting in a cage dreaming of a James Bond-worthy escape. Khalid repeats, over and over again, the same strain: why am I here and how could anyone think I am a terrorist? I’m just a kid. Call my school. Call my parents. Ask them, ask anybody!

No one listens. That’s the red flag, the danger. Listening to each other, sharing stories, empathizing with your fellow man is the human aspect of humanity. The power of good fiction is its ability to suck you in and to feel like the protagonist is sitting there, on your bed, telling you his or her story. You can’t help but empathize and feel concerned. It’s a complicit act on part of the reader to trust the narrator and protagonist and recognize their words in the suspension of disbelief. As a protagonist, Khalid accrues reader empathy in spades. And while Guantanamo Boy doesn’t quite fit the bill of absorbing, compelling fiction à la Phillip Pullman or Suzanne Collins – I lost focus a few times, the action lagged and dragged in the middle sections, and the final chapter concluded with too much joyful familial pomp and fair for my liking – I give it a pass for its effort and agenda. Aside from my small grievances, I believe this story would have flourished if it were a graphic novel. Nothing hits home harder than images of human suffering and some of Perera’s sections begged to be drawn. I could just picture the warehouse where Khalid stayed for weeks waiting in transit, like a dog in a wire mesh cage. That scene deserved visual expression. With abuses and crimes like Khalid’s, words don’t capture enough (and it is clear Perera is trying).

It’s a story that needs to be shared. No one can finish Guantanamo Boy with a cold heart. The story is a call to action and homage to the suffering of thousands of innocents quarantined and labeled enemy combatants. The message of the book may be peace but it is hard not to get angry. The important thing, however, is that young readers are aware of the situation and understand its importance. I believe Guantanamo will haunt Americans for centuries, not only as an institution but as a foreign policy. As of March 2011, the U.S. military installation on Guantanamo is still open (despite President Obama’s promises). Some 171 people remain and, like Khalid, they have been refused basic human rights. Broken down and treated like animals, by animals. 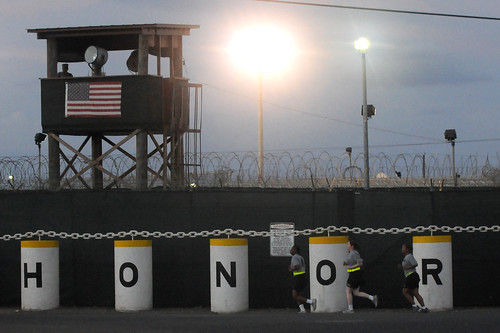