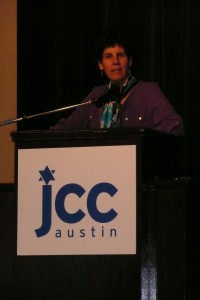 I had the pleasure of meeting Melissa Faye Greene at the Austin Jewish Book Fair in November. She was there to sign No Biking in the House Without a
Helmet (Sarah Crichton Books, 2011) and to provide the opening address. No Biking is a memoir chronicling how she and her family of six (mom, dad, four kids) adopted five orphans from overseas—one Bulgarian-Romani and four Ethiopian—over a period of eight years.

Gotta love this woman, gotta read her book. Smart, witty, warm—in person and in print. Greene is an award-winning journalist best known for her books on the civil rights movement and the African HIV/AIDS pandemic. NYU’s journalism department named Praying for Sheetrock one of the top 100 works of journalism in the 20th Century. But at the lectern, she’s a poet-performer. She belongs on the Chauttauqua lecture circuit of yore, delighting audiences with her wisdom and charm.

For Greene, writing in the first person was both unfamiliar and uncomfortable. Clearly, she overcame these obstacles. But this memoir is no bildungsroman in that it’s not about her. It’s about her family—the decisions they made, the antics they performed, and the travails they passed through. Greene readily acknowledges the depression she slipped into and the seemingly insurmountable challenges presented by children whose starts in life were so tumultuous. With the clear-headedness that comes with her profession, she observes her surroundings, arms herself with information, weighs possible outcomes, and soldiers on.

At the lectern, Greene is something of a comedian. Many of the stories she shared in Austin came verbatim from the book. There’s Jesse, the first adoptee, taunting Helen, the second, that if she doesn’t remove her underpants when she bathes in the mikveh to be converted, her butt won’t be Jewish. There’s Greene’s biological daughter, Lily, at age two, waving good-bye to a strip of plastic ribbon whipping in the wind at a gas station as Lily imagines this stop is the much anticipated family trip to Disney World and the ribbon, Tinkerbell. There’s Fisseha, the second Ethiopian adoptee, who spears a flying Frisbee with a bicycle safety flag pole and teaches the neighborhood kids to make slingshots and whips from tree bark and plants.

Yet, in the book, Greene’s hilarity is tempered by her encounters with the chilling circumstances from which she plucks these new additions and the baggage that comes with them. Jesse was separated from his parents in infancy and lived the first four years of his life in an institution, making it especially hard for him to learn to play or to feel safe. The other children who lost their parents to AIDS were held and loved when young, but they are old enough to remember and to miss the families and homeland left behind. Nevertheless, as Greene writes, “The power of the human mind to repair itself is a remarkable thing.”

I don’t believe I would have read this memoir if I hadn’t heard Greene speak. Her audience is adoptive families and international adoptive families as well as readers of her previous books who want to know more about this journalist’s life. As a thoroughbred skeptic, I’m not inclined to believe anyone could assume the burden of adopting five challenging children without some hidden—possibly unhealthy—motive or agenda. Yet, from what I’ve read and what I’ve seen, I can only conclude that she’s the real thing . . . the genuine article. And the human community is lucky to have her—as journalist, mother, wife, and human
being.